Continuing the discussion from In the beginning… a filesystem: 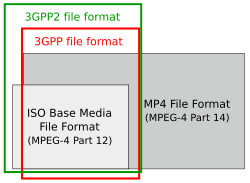 3GP (3GPP file format) is a multimedia container format defined by the Third Generation Partnership Project (3GPP) for 3G UMTS multimedia services. It is used on 3G mobile phones but can also be played on some 2G and 4G phones.

Okay, so “3G” phone container format, a low-resource MP4. I suppose I ought to convert this, but what is a decent archive format? I only have a handful of this files in this format, so this is essentially a one-off for me.