a "no smoking, because second hand smoke" sign with a flow chart in berkeley in 2017 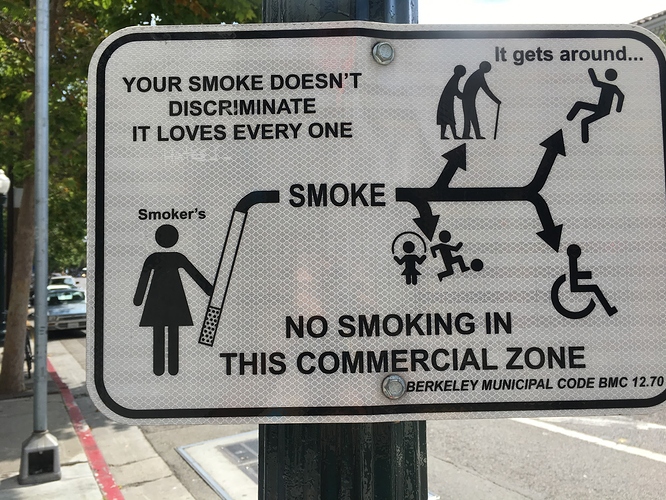 i was looking for other stuff in google photos (i know… i know) and came across this old photo from 2017. “your smoke doesn’t discriminate/ it loves every one” it says on the upper left, and “it gets around…” on the upper right. there’s a stick figure wearing a dress that is labeled “Smoker’s” (sic), holding a cigarette that is as tall as her, with a thick black arrow coming out of it labeled “SMOKE” that has branching arrows going to :a small dress-wearing stick figure jumping rope and small pants-wearing stick figure kicking a ball; two stick figures with sloped backs (again one wearing a dress and one wearing pants) and a cane; one stick figure in a wheelchair; and one “person falling down” stick figure that you’d see in a “danger! cliff!” sign.

there is just so much going on in this sign. i don’t remember taking the picture but i can clearly see why i did lol

the bottom of the sign says “berkeley municipal code BMC 12.70” in small italic capital letters, and i’m typing it out here in case we need metadata about berkeley street signs to be searchable