I’ve been playing “Brave Battle Saga: The Legend of the Magic Warrior” by Piko interactive. It’s an unlicensed Taiwanese RPG for the Sega Genesis, that Piko Interactive licensed and localized in recent years. My understanding is that they had to strip out and replace some stolen music to make it legit, but find it kind of cool that they did that.

Only maybe a fourth of the way through the game? Maybe a little less. It’s very pretty for an unlicensed RPG, with excellent sprite work. The story is tropey but so far not bad. The combat and encounter rate are unbalanced though.

Weird bit in the game:

Somewhere between 1/3rd and 1/2 through the game you arrive at the city of Imir. If you talk to all the 16bit sprite people walking around in the city as one does, one will discover a love triangle with two women (Yuan and Guang) and a young man named Jie. Jie cannot decide who he desires more Yuan or Guang.

Now you have the option of trading some love letters between them to hook them up. This isn’t part of the main story, but a cute segue in the game; and not too uncommon for the genre. But what proceeds is something eyebrow raising.

If you talk to Guang after recieving a love letter from Yunag, she will (a) write her own love letter and (b) try to get you to replace Yuang’s love letter with a rejection letter.

This will send Jie into Guang’s arms. But if you talk to Yuang after that and before talking to Jie, she will thank you for warning her of the rejection and give you a fresh love letter.

With two love letters secured from two different girls, when you attempt to deliver them to Jie, the game informs you that you only hand him the rejection letter in confusion.

Jie then declares he is committing suicide and runs off screen. Jie will be nowhere in the city and both girls will declare their hatred of the player for murdering him from there on out.

I’ve never seen anything like this in a 16bit RPG. 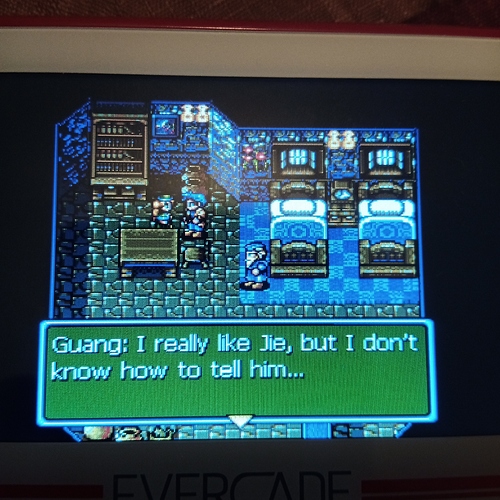 Thank you for your tech demo. Unfortunately we are not currently licensing games with, um, “adult themes”, such as love triangle letter quests that end in NPC suicide. Also, we’re pretty sure some of that music was taken from games of ours…