I love this articleby Christine Peterson about her coinage of the term “open source”, not just for the story (which I’d known about, but never heard in detail), but for the tone of the piece. It’s written in what I generally think of as “Geek Old Semi-formal”: this precise, slightly low-affect, somewhat wry tone that seeks to depict the maximum number of factual points, in a simple but almost shockingly accurate way.

In pretty much everything I’ve done, I’ve fought with the hellish triangle of being readable, entertaining, and truthful. Sometimes you end up flexing the absolute clinical truth for one of the others: for instance, I don’t really “generally think” of Christine’s tone as “Geek Old Semi-Formal”. I just made that term up on the spot. I didn’t quite confess that earlier, because it sounded funnier to imply I’ve used this name, even just internally, for years.

Compared to just describing the tone flatly, I did very mildly better on the entertaining axis (at least in my own mind), probably just as readably, but really not as true. (It was also easier to write — because a term like that is actually exactly what I need for a title. Great, I’ll paste that into the title box up there, and maybe that will become the hook for others who reblog this.)

Anyway, where was I? Right: so, actually honest documents are rare, mostly unentertaining and largely unreadable. We rarely optimise for the absolute truth, because either one of “readable” or “entertaining” is more immediately valued, and rewarded.

Geek Old Semi-Formal is readable and true, at the expense of some of the fripperies of language that we associate with entertaining speech. It’s this beautiful upgrade of technical writing to convey conversation, stories, anecdotes, and the communal trivialities of our lives.

As part of my Plan 9 binge (did I tell you about my Plan 9 binge?), I’ve been reading lots of old Unix papers, which all aspire to this style. As the New York Times said in its obituary of Dennis Ritchie:

Colleagues who worked with Mr. Ritchie were struck by his code — meticulous, clean and concise. His writing, according to Mr. Kernighan, was similar. “There was a remarkable precision to his writing,” Mr. Kernighan said, “no extra words, elegant and spare, much like his code.”

I don’t want to say that computer geeks got this from Kernighan; I think that there’s a wide set of folks involved in factual-seeking professions and hobbies that hold similar aspirations, and end up admiring and adopting the same style. 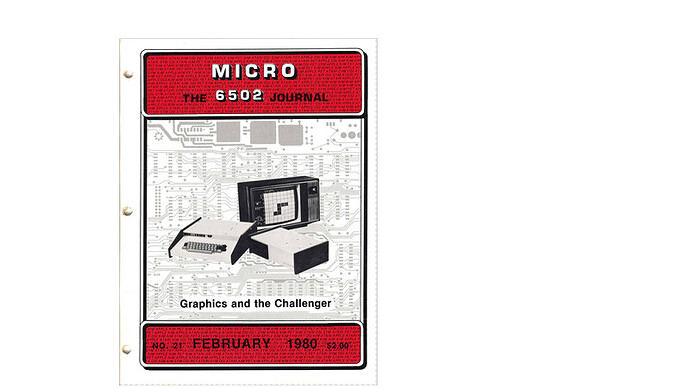 This morning, I opened a mystery package delivered by the “browsing ebay auctions at 3AM”-fairy. It was a paper copy of this February 1980 issue of MICRO: The 6502 Magazine purchased for reasons of unstoppable nocturnal nostalgia.

I think even the august editors of MICRO would concede that the writing skills of its contributors were pretty variable. The year 1980 seems to be a seller’s market for 6502 periodical literature: There’s a full-page advert pretty much begging for people to write articles. (They’re paying $50-$100 a page, too, if you want to go back in time.) But for me, that variability is just a great opportunity to watch the Geek Old Semi-Formal style fail and crumble in different ways. The feigned jocularity! The laundry lists! The science paper formalism! I won’t point fingers, but you can flick through this copy of MICRO to see for yourself the rich panoply of Geek Old stylings.

It’s also a style I really have come to enjoy in face-to-face interactions too. There’s just something deeply comforting about sitting and talking slowly and precisely with someone, each of you carefully constructing entirely accurate sentences with little overall variation in tone or pace. Especially by contrast to the usual chit-chat of slapdashing word-sounds together and slinging them out your mouth in order to fill time and show off, between gurning physical expressions and uncontrollable emotional explosions.

Not that it doesn’t also work for emotions, too. I think of all the times someone I know has flatly, compactly and desperately clearly conveyed their experiences: remaining calm, grammatical and short-sentenced even as the tears stream down their face, and their life fell apart.

I wonder, too, why I associate it with older geeks (older than me, for sure). It smacks a little of the repressed-fifties model of male scientist, though I don’t think of it as entirely gendered; in real life, it seems as strange on men as women. And I see people younger than me adopting it, often comically until they get it right. It’s definitely a bit on-the-spectrum—but I’m not on-the-spectrum and I use it, and aspire to it.

Well, now I’ve felt it so strongly in Christine’s great piece, I’ll start looking for it more, in words and in conversation. And now I have a name to call it!

In pretty much everything I’ve done, I’ve fought with the hellish triangle of being readable, entertaining, and truthful.

I’ve also struggled with this, as it is sometimes difficult to translate technical knowledge into a narrative, the story that humans pick up on so easily.

Part of the machine is using talkgroup as a greenhouse, to grow ideas and cross-pollinate with others, before moving it into a specific digital garden.

This morning, I opened a mystery package delivered by the “browsing ebay auctions at 3AM”-fairy. It was a paper copy of this February 1980 issue of MICRO: The 6502 Magazine purchased for reasons of unstoppable nocturnal nostalgia.

I think even the august editors of MICRO would concede that the writing skills of its contributors were pretty variable.