Dusting off the ol' 3DS

A couple announcements for the 3DS came out recently that made me start using mine again. The first is new games in the StreetPass Plaza, which I always love, and another about Animal Crossing.

First off, the new StreetPass games are fun! Quick descriptions:

So they get kinda weird after a while. But there is another neat feature in the update: the plaza gate line! It let’s you pass up to 100 people and let them in the plaza 10 at a time. Which while that sounds less enjoyable than inviting everyone into your plaza wonderland, but it does mean you don’t have to constantly empty your StreetPass queue during day trips.

The other day e asked me to help clear out eir inventory, and I said to just drop it on the ground. Well, that wasn’t working, because there was not a space available in the town to place anything. There was stuff everywhere! But not trees or rocks. It was like locusts went through and used the raw materials to manufacture various items that would be useful to simple town living, and left them in a perfect grid across the land. Nanomachine cargo-cults!

Clover also loves designing clothing with the image editor, and moving around furniture in the houses. And then giggles after a hard hour’s work by going to the cafe and drinking coffee just like eir parent. I really enjoy watching C play it. So I was jazzed to hear that there will be a “Welcome amiibo” update to New Leaf!

It will introduce the use of amiibo cards to welcome new characters to your town (they come in their RVs!). This appeals to me, because I wanted to collect something with Clover, but the value that amiibo figures full in are really off-putting for me. I just want to collect and unlock stuff, not invest in “collectibles”. 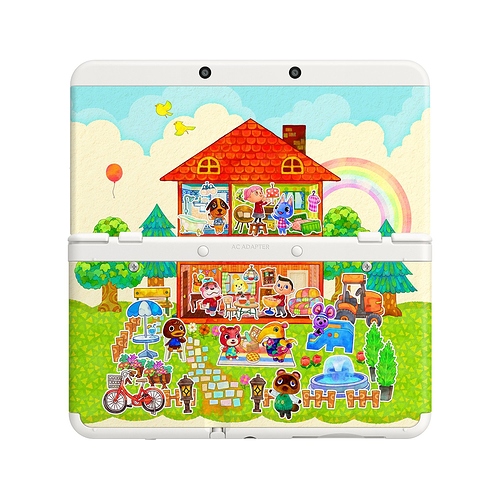 Of course to use the new update an RF reader is required, or the literally named, “New 3DS”. I’ve been thinking about getting a game system specifically for Clover (e is currently using Susan’s), and then I found special eddition 3DS that comes with Animal Crossing: Happy Home Designer, with accompanying faceplates! I don’t know, I think that is exactly what I want Clover to want me to live vicariously through Clover with. Yeah, that is what I think.