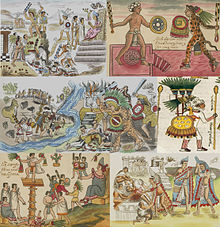 A flower war or flowery war (Nahuatl languages: xōchiyāōyōtl, Spanish: guerra florida) was a ritual war fought intermittently between the Aztec Triple Alliance and its enemies from the "mid-1450s to the arrival of the Spaniards in 1519." Enemies included the city-states of Tlaxcala, Huejotzingo, and Cholula in the Tlaxcala-Pueblan Valley in central Mexico. In these wars, participants would fight according to a set of conventions. During the Spanish conquest of the Aztec Empire, Tlaxcala allied w...

The Aztecs considered flower war death to be more noble than dying in a typical war; this can be seen in the word for a flower war death, xochimiquiztli , which translates to “flowery death, blissful death, fortunate death.”

That seems like a dope as hell premise for a campaign.