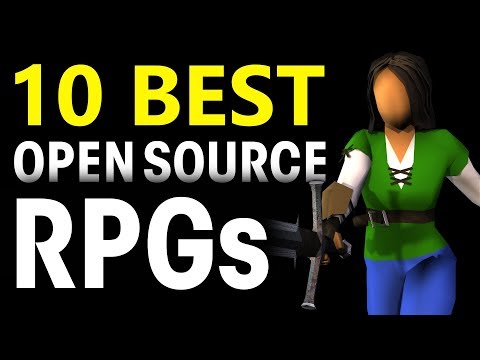 Top ten RPGs - I made a video of this. People who love text so much they would marry it, will be delighted to see this concise si...

Top ten RPGs - I made a video of this. People who love text so much they would marry it, will be delighted to see this concise side-product of that video. A list of sorts. With thoughts that came to me after the fact. Especially nagging thoughts.

The bestness of films is determined by their profitability. Which one can claim allows concluding the quality of the product. Maybe the marketing is part of that product.

Whatever the case, none of this is applicable to the underground niche pro-tip specialized target audience-seeking open source games, where using the word choice “open source” is valid enough to stop writing and discuss philosophy.

Thereby I declare that " best " means " complete-ish, playable, fun " which is 33%-66% objective. I present to you - in order of " not like in the video " - the best eleven minus one* RPGs that ever existed yet.

RPG platforming is still a concept to get used to but for some reason It works well. As for balancing: I have no idea if I could finish it with melee weapon choice. Ardentryst’s ending is a little anticlimactic but I’m just happy to have an ending at all.

I don’t actually know what the ending looks like of the classic Diablo-esque game for Linux and the open source sphere. Freedroid RPG seems however to dictate : pick either fun (hacking droids) or progression (experience point rewards in exchange for direct kills).

Custom resolution support AND 3d graphics is great, the UI is tiny however in DNT. I just reported a build error and a fix was pushed hours ago, so I’m looking forward to trying to compile it again! The vertical slice that is the game is not very thick but so colorful! Nerdy post-apocalyptic humor FTW.

The first time I saw FLARE art in another game was Erebus. The D&D feel is great for someone like me who loves the memory of playing Baldur’s Gate II but hates actually investing the actual time to actually play it actually. The most boring part so far was finding new items - there seem to be so few and none seem special. On the other hand: less item micro-management.

It is weird that this even exists. It is so freaking polished. The only weird things are: shooting corners of walls and… I guess the android version setup. Theoretically FLARE is totally mod-able. I worry that the people that are not scared away by the documentation might be the kind of people who will just start writing their own engine instead.

I fell in love with only one jRPG - a genre I usually hate for the grinding and unskippable animations/sequences - because it had painless and low quantity grinding. Fall of Imiryn is short and sweet. I actually contributed a little. It is complete and done and as long as Python 2 remains, it will be playable. That is at least 5 more months and 6 days.

When I enjoy the humor of a game, that can be the hook it needs to catch me in its net. FreeDink is cartoonishly-brutal, silly, stupid. The hero is a prick . I like it. I haven’t ever finished it yet but I am curious to one day find out his punishment.

Speaking of humor: this is a joke . I love it. I did play nethack but it was kind of a social pressure thing. For IVAN however I was glad to learn the initially painful controls.

I am very much not into Wesnoth or Panzer General . Therefore if I ever ran into Hale before, I had ignored it. I was wrong to do so. I like the spells, I like the relative casualness (compared to roguelikes). I don’t know whether I like the inventory management yet. It has absolutely no sound, which is a problem for me. Others will love that fact.

When upon entering a game it feels like I should know what is going on, a variety of emotions is triggered. The end sum (pun intended): is it worth it, let me work it. Summoning Wars is dead, long live Summoning Wars. Just like OGRE . Im impressed by how much playtime it has already. The visuals (oh the grass textures) might prevent me from even going beyond the first few maps but still one of the best.

I lost my patience on my lest test-play of Valyria Tear and used Cheat Engine (don’t ask). My only regret was that it took me hours to remember to use speedhack. The extreme difficulty is just as problematic as the slowness of movement and battle - for the kind of time-greedy being that I am. Story seems cool though and the characters too.

*try guessing (without watching the video) which of these actually does not belong on the top10 list!

While re-finding all these projects, I was really happy that SourceForge still exists. Didn’t expect to ever think that thought again.

Looking for an RPG to relax to, gonna take these for a ride.

I tried to get through this list, but I don’t particularly like dealing with sourceforge’s website, and most of these apps need some type of external dependency management, which to me means they aren’t ready for the gaming demographic I’m interested in.