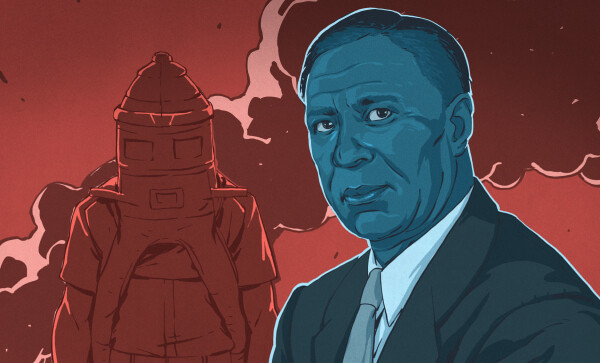 Some people invent with the intent of seeking fame and prestige. Few inventors seem to truly care about other people the way that Garrett Augustus Morgan did. His inventions saved many lives, inclu… 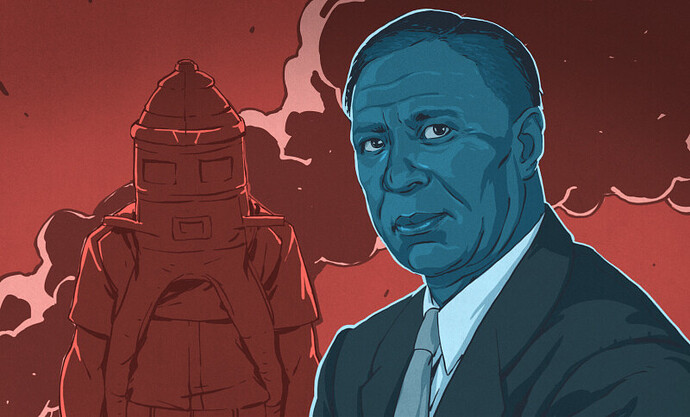 Some people invent with the intent of seeking fame and prestige. Few inventors seem to truly care about other people the way that Garrett Augustus Morgan did. His inventions saved many lives, including those of a few people who were rescued by Garrett himself after an explosion tore through a tunnel beneath Lake Erie.

Though he had little formal education, Garrett’s curiosity took him into many fields from sewing machine repair to gas masks to transportation problems. He achieved great success and improved many lives along the way.

Of Seams and Straighteners

Garrett Augustus Morgan was born March 4th, 1877 in Claysville, Kentucky. He was the seventh of eleven children born to Sydney and Elizabeth Morgan, who had both been slaves. His mother was part Native American.

Armed with a sixth grade education and ten cents in his pocket, Garrett left home at fourteen look for work, which was common for kids his age at the time. He first landed in Cincinnati and spent a few years working as a handyman.

In 1895 he moved to Cleveland and started repairing sewing machines. This is where he developed his taste for the way things work. After a decade or so, he opened his own sewing machine shop. He had gotten married in the meantime, and a few years later, he and his wife Mary Anne, a seamstress, opened a discount ladies clothing store and hired thirty-two employees to make all the suits, coats, and dresses in-house.

One day Garrett was sewing a woolen fabric that kept getting scorched by the extremely high speed of the sewing machine needle. He experimented with a few chemicals to coat the needle and keep it cool. As the story goes, he wiped his hands off on a piece of cloth and went to lunch. When he came back, the wavy fibers in the fabric had been completely straightened by the chemical.

Curious, he tried the solution on his neighbor’s dog’s fur, and it straightened that, too. Then he worked up the nerve to try it on his own hair, and discovered the hair relaxer. He turned the solution into a cream and established the G.A. Morgan Hair Refining Company to sell his hair relaxer to African Americans. The company was terrifically successful and Garrett earned enough money from sales to keep inventing. 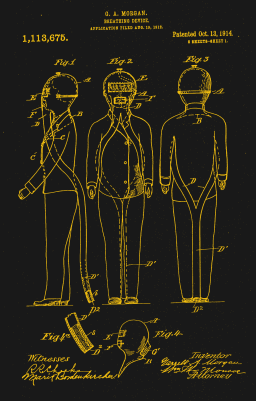 A Hero in Pajamas

In 1914, Garrett patented a safety hood that shielded the wearer from inhaling smoke and noxious gases. The hood worked on the principle that smoke rises, and featured long hoses that brought cool, clean air up from ground level. The hood also used a wet sponge to cool and filter the incoming air.

Garrett promoted the device to fire departments and often demonstrated its effectiveness himself. It won first prize at the Second International Exposition of Safety and Sanitation, and became the prototype for the gas masks used in World War I.

When it came to showing the hood to the public, Garrett distanced himself from the invention. He would hire a white actor to pose as the inventor while he himself portrayed a Native American man named Big Chief Mason. Garrett would demonstrate the hood’s effectiveness himself by building a chemical fire in a tent and then sit inside it for twenty minutes. 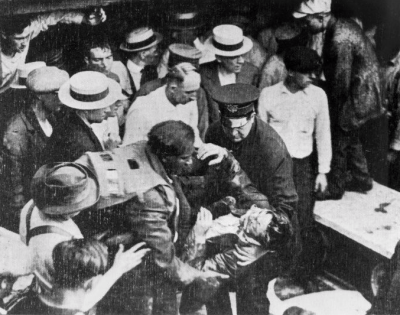 Garrett rescues someone from the tunnel. Western Reserve Historical Society via Popular Mechanics

One early morning in 1916, Garrett’s breathing apparatus was spontaneously put to the test. City workers were drilling a fresh water supply tunnel beneath Lake Erie when they hit a pocket of natural gas. The resulting explosion trapped several workers underground, breathing mostly toxic fumes and dust.

Someone roused Garrett from bed, and he and his brother Frank rushed to the tunnel in their pajamas with Garrett’s ventilation hoods in tow. They managed to save two lives before the rescue operation was shut down.

Unfortunately, the publicity hurt sales because people found out that the inventor of the smoke hood was African American. Garrett and his brother weren’t recognized by the city for their heroic efforts at Lake Erie until much later. Although the mayor had been at the scene and called them heroes, the newspapers only mentioned them in passing. 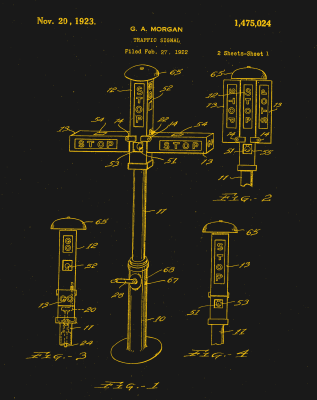 No matter how he was received, Garrett couldn’t stop his desire to invent things. He was an early adopter of the automobile and eventually developed a friction drive clutch. In 1923 he designed a new kind of motorized traffic signal after witnessing an accident at a notoriously bad intersection.

At the time, traffic signals were basically ‘stop’ and ‘go’ with no warning between the two. Garrett’s signal had a warning light that told drivers they would need to stop soon — the yellow light. It also had a ‘stop all directions’ setting that gave pedestrians time to cross the street. Although Garrett acquired patents for the traffic signal, he reportedly sold the rights to General Electric for $40,000.

Garrett began developing glaucoma in 1943 and lost most of his sight. He died in 1963, one month before the centennial celebration of the Emancipation Proclamation where he was recognized by the government for his achievements.

Garrett Augustus Morgan was a great inventor who wanted to make people’s lives better, and did so in the most varied ways. He deserves recognition for his heroic efforts at Lake Erie as much as his lifesaving inventions.