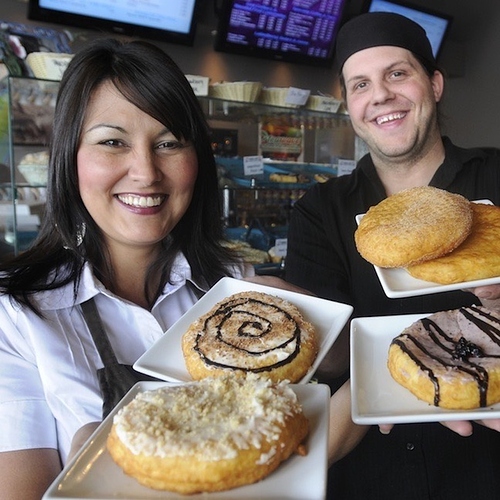 In northern British Columbia, a female chef draws on her native heritage and introduces diners to local, pre-European cuisine. Generations ago, Indigenous communities living in harsh environments found comfort and sustenance in a basic bread...

In northern British Columbia, a female chef draws on her native heritage and introduces diners to local, pre-European cuisine.

For many remote First Nations communities throughout North America, flour wasn’t available, so bread was made with ground-up roots, bear fat and berries to sweeten, it was then cooked in an open fire or wrapped around a stick to bake.

This bread, called bannock, changed over the years incorporating ingredients like flour, fat, and sugar that were rationed to people after the government forcibly removed them from their land. It was then fried and became an important staple at powwows. Indigenous people took the scraps of oppression and made something delicious with it.

Powwows are a meeting, a chance for Indigenous people to get together and showcase dancing, singing, artisan creations and spend time in cultural appreciation and celebration. They have also served as an act of powerful resistance against continuous attempts to destroy, legislate and remove Indigenous culture. They are a demonstration of pride.

Sharon Bond, who is from the Nooaitch Indian Band in Merritt, British Columbia, has made her “bannock and butter” from bringing this ancient food to modern diners and the public can’t get enough.

“Bannock was a survival bread that really brought communities together through celebrations and gatherings. And it was one of the roots of keeping people alive,” she says.

Bond owns Kekuli Cafe, which has become the first Indigenous-owned restaurant franchise in Canada. With two locations and a third set to open in the near future, Bond’s long-held desire to run her own restaurant has come to fruition. But it doesn’t stop there; by offering franchising opportunities, Bond is helping to empower another generation of Indigenous entrepreneurs to taste success with bannock too.

“Indigenous youth can be supported from the time they are in high school. We need to bring entrepreneurs and business people into schools to teach and inspire youth, to bring out their ideas and to be creative and know that they can make their dream into a business. Mentors are needed,” she says.

She herself guides and empowers youth and aspiring business owners through an initiative called Futurpreneur and through monthly Indigenous Women Networking Sessions. She also sees mentorship as a cycle and continues to benefit from her own mentor, a successful restaurant owner, who she can talk to about any industry-specific questions she may have.

Her journey to becoming a restaurant owner was a long process, in part because she wanted the endeavor to be a success and took her time to design a winning product.

“It took a few years to do the business plan, we took our time to make sure that everything was going to be just right, the colors, the logo, the slogan. We just wanted to have a very strong business. It took time to get to that point and then when we finally opened our doors people thought we were a franchise which was pretty cool. So, I said, Well, we’re not, but we will be now!”

One of the decisions she grappled with was the name for the cafe, she eventually found the word “Kekuli” in a book by James Teit, a Scottish anthropologist who wrote extensively about the people of the Interior Salish First Nations.

It’s the name for a winter dwelling, found across the Okanagan region, a house built into the ground to provide shelter and warmth. Pronounced ke-koo-lee, it seemed like the perfect moniker for the type of space she wanted to create, she registered the business name the very same day.

Even though the process of launching the business was a slow burn, Bond has been interested in cooking since she was a child, when she was making a mess in her mom’s kitchen and watching her bake cinnamon buns and bread. She remembers enjoying the smell of spices and recently found an old recipe book with a missing cover, the pages of which were decorated with her childish doodles and colorings.

One of her mom’s regular recipes was chili, which also features on Kekuli Cafe’s menu, although Bond says its quite a different recipe. A staple offered at powwows; chili is traditionally served atop a piece of bannock to catch all of the meaty juices.

Bread forms a part of almost every human culinary culture across the globe and Bond has often been told that her bannock reminds customers of other fry bread that they remember from their childhood, whether that was in China, Scotland or anywhere else across the world.

Different Indigenous communities across North America make their bannock to their own unique recipes, in fact, at Kekuli they have their own ancient and secret recipe.

Bannock fans will find that the familiar frybread taste replicated perfectly at Kekuli Cafe with regulars often praising the softness of the bannock. But you can also find a number of innovative menu items like dessert topped bannocks, BLTs and bannock-wich sandwiches.

“Time has evolved so now we’ve got flour and oil and cast iron pans and fryers. It’s bannock with a twist, you know a little bit more contemporary bannock,” she says.

That contemporary bannock topped with sweet treats remains very popular but the traditional bannock is favored by purists as are some of the sweet yet naturally Canadian flavors from the land like Saskatoon Berry, Maple Glaze, and Maple Walnut.

The restaurant’s slogan “Don’t Panic… We Have Bannock!” came about from one of the first customers who ran up to the counter worried that they may have sold out. Sharon reassured them by stating the now-famous line and they all broke into laughter.

Bond is an incredibly warm person who makes people feel at ease, no doubt due to her genuine care and concern for how others are feeling. One of the philosophies that Kekuli Cafe is built upon is that all her customers should feel acknowledged when they arrive.

“I wanted to open a restaurant for 20 years and I always thought ‘Oh I’m going to do this with my restaurant,’ I’m going to make sure everyone smiles and is acknowledged, you’re not just someone who comes in and orders and sits down and that’s it. You know, I engage with all my customers and I really felt that there wasn’t enough compassion or empathy, it’s important to make someone’s day,” she says.

Bond is also humble and credits her success to the whole team. In fact, she was recently awarded the Indigenous Woman-Business Award of Excellence from The National Aboriginal Capital Corporation but was almost too shy to tell me. She admitted that she sometimes finds it difficult to enjoy her success without feeling like she’s bragging.

Where she excels, however, is in empowering other women to proudly and confidently promote themselves. A culture she is trying to develop in her local community through her Indigenous Women Networking Sessions.

“I can see it becoming a very important networking group. I’ve been to other networking groups for women and sometimes I just feel out of place, it doesn’t seem to be me, I’m not a high heel wearing type person and everyone’s all decked right out and I am more of a Doc Martens person!” she says.

Through mentorship, encouragement, and plenty of bannock, Bond is building a culture of shared success.