Janet died two weeks ago, whereas my mother died twenty years ago when I was abandoned to become a homeless teenager.

It’s strange to mourn so long after the fact. The nature of my abandonment meant I couldn’t explain it even to myself. Since then I have grown to an adult, lived a spell, and secured my own family.

It’s strange to even think about Janet/mom.

So many versions of this person, now definitively only in my head.

Some of those versions I hate. When I talk to them I become filled with accusations and rationale, and they don’t care, because they aren’t real.

Some of them I fear. I don’t talk to them, I hide. From them, from their toxic miasma, and ultimately from myself. I want to say they aren’t real, but fear is a reality. I’m working on a plan to deal with fear, but honestly I struggle…

Many of them are larger than life, and I adore them. We banter and boast, my memory versus my experience. Not competitively, more… hmmm, what is it called when one feels free and light, without burden… Relaxed? I feel sad, too. It is them I wanted to meet Clover.

And then there is that shy creep I occasionally catch a glimpse of. I wish I could speak to them. But they aren’t a “them”, just a single memory of an all-encompassing hug, so full and warm that I can’t hear the noise and fear and uncertainty outside the hug.

I’ve been searching for that hug, perhaps only that hug. I’ve looked in all the right and wrong places, because I’ve looked everywhere.

Janet lived a hard life, helped a lot of people, cared and felt so much it hurt and constantly ran away, and passed in peace two weeks ago.

The memory of my mom makes me angry and afraid and lost. But I have love. I may never have their love, but I have my own. And that’s probably the best we were gonna get.

I always thought Janet was a hat full of people. Not just in how she effected people, but in who she was. She was splintered in a weird way, most likely from her own experiences. I knew there was no way to connect with who she might have been before the splintering. So I distanced, and watched. I hope that helps you understand how I responded to her while she was alive.

Mourning is I time to distance if you can, and watch a person’s life unfold, first in relation to you (which is the hardest), then in relationship to themselves. I’m hear for you. I always have a hug for you, such as it is. Don’t hesitate to call.

Btw, I’m changing my last name to Earthstone. In case you wondered about the account name.

Thanks. It’s good to know how others saw em.

We have such a confluence of weird shit going on in our family, I never know which part to address, or if I understand the same things I study. We’ve got abuse, we’ve got mental health issues, we’ve got chemical imbalances, we’ve got this criminal element forcing us to ever move, we’ve got substance abuse…

In a lot of ways the facts of my life are too surreal for me to grasp all at once (which I find amusingly ironic).

My mother’s mother was a tortured, cruel person from a poor war-torn country, and I feel it in my bones. In that sense of our ecology, our environment, it expresses itself into our physical and mental systems.

Circling back: I’m not sure there was a pre-splintering person. Janet run away from home at age 13, and from my understanding it was quite the quality of life improvement. I wonder if e exiled me by eir logic of us being better off on own own, rather than with our mother…

Fortunately I’ve gotten a process to get through the day. And @susan mentioned writing my memories on paper and burning them because

I always thought Janet was a hat full of people. 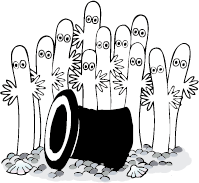 I always have a hug for you, such as it is. Don’t hesitate to call.

I’m so sorry. I was older when my relationship with my father fractured, and we stopped speaking or seeing each other. But I know that mental dissonance even when they are still alive is difficult.

Who they were, who they could be, who they sometimes were, who you wanted/needed them to be. That mental litany of emotions and memories; it is intense. I kind of fear the day where I have to go through what your going through, when I have to square that with their passing.

You are a good person. I’m sorry for the weight of all of this on you.