Last night I went to bed at around midnight, and this morning I got of bed at around 9am. This is the first time I’ve slept this long (and at night-time) for weeks! For the last month or so, I’ve been awake for a three-hour stretch, then asleep for three to six hours, then awake for another three hours, and then asleep, and so on.

I drank some coffee just now. I keep trying to make it easier for myself, so the last time I went out (over a month ago), I bought some instant coffee crystals from Safeway. I know, I know, it is gross. But gross-and-consumed is better than delicious-and-never-made. I am so lazy and also so tired.

Yesterday, I saw some friends’ faces on video chat for a birthday! We improvised a remote way to play what we affectionately call “jam comics.” In our a cappella group, which has met for over 20 years, we have drawn together at many in-person parties. Everybody starts out with one 8.5x11" sheet of blank paper and a writing utensil. Everybody folds up their paper half longwise (valley?), and in thirds shortwise (mountain? no, that’s not quite the right analogy), and you end up with six panels. You draw anything you want in the first panel, then you pass your sheet of paper to the person next to you (clock-or-counterclockwise), then you draw the 2nd panel on whatever sheet of paper you just got passed, and so on, and then at the end of passing all your papers six times, you end up with a bunch of collaboratively-drawn comics.

Last night, we used Discord, pen/paper, and our phones to play! In my Discord server, I set up a custom birthday role for the people playing, and a new “category” that people with this role can access. (I only did that so the new channels I created don’t clog up the channel list for non-participants, and for a sense of “privacy,” I guess? Privacy is the wrong word here?) I created a lot of separate text channels and named each one with each of our players, and that denoted “this player created the first panel of a comic.” This was L’s idea! I just made the text channels. (At the end, you read the comic by reading one channel.) Then each player drew something with pen(cil) and paper, took a picture of it with their phone (using the “square” filter or cropping it later), and then uploaded it to their channel. Then they tagged the next player in alphabetical order. We encouraged each other not to peek at other channels (aka other comics-in-progress). We only looked at a channel when we got tagged in it, and then drew the next pane, uploaded it into the proper channel,

We ended up with five completed panels, with six panes each. We only had five players, so that meant that everybody who started a comic finished the same comic, which was an interesting turn of events (by convention, the person to draw the sixth pane of a comic is responsible for “the punchline.” This doesn’t always happen lol). It was pretty fun.

We ended up all uploading a photo of whatever we drew on, because they sorta make a comic of their own that makes no sense, because each of us drew a pane for five different comics!

I bought a piano. It arrived today. 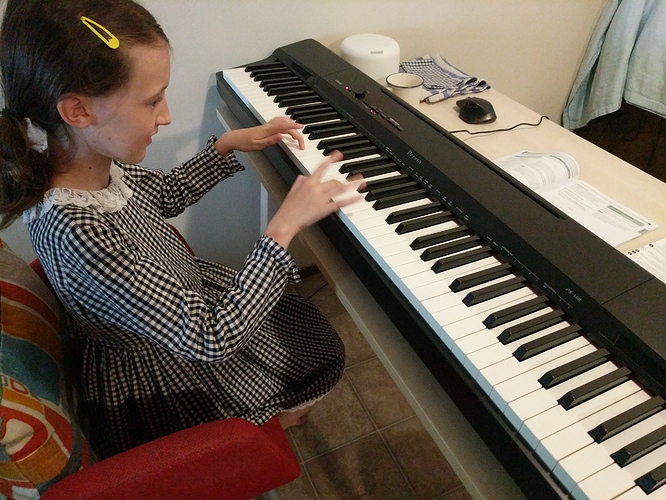 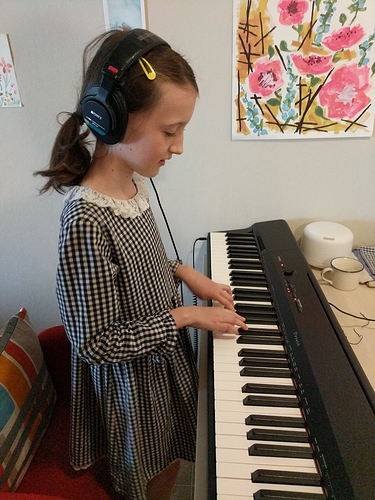 no way! ditty did too! pictures later!