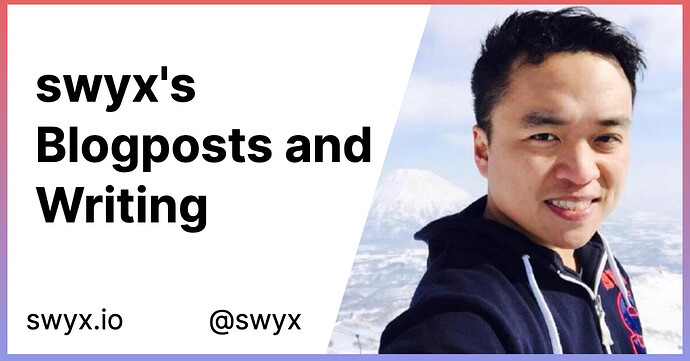 Learn In Public: The fastest way to learn

The fastest way to learn, grow your career, and build your network.

If there’s a golden rule, it’s this one, so I put it first. All the other rules are more or less elaborations of this rule #1.

You already know that you will never be done learning. But most people “learn in private”, and lurk. They consume content without creating any themselves. Again, that’s fine, but we’re here to talk about being in the top quintile. What you do here is to have a habit of creating learning exhaust :

Whatever your thing is, make the thing you wish you had found when you were learning. Don’t judge your results by “claps” or retweets or stars or upvotes - just talk to yourself from 3 months ago. I keep an almost-daily dev blog written for no one else but me.

Guess what? It’s not about reaching as many people as possible with your content. If you can do that, great, remember me when you’re famous. But chances are that by far the biggest beneficiary of you trying to help past you is future you . If others benefit, that’s icing.

If you’re tired of creating one-off things, start building a persistent knowledge base that grows over time. Open Source your Knowledge! At every step of the way: Document what you did and the problems you solved.

The subheading under this rule would be: Try your best to be right, but don’t worry when you’re wrong. Repeatedly. If you feel uncomfortable, or like an impostor, good. You’re pushing yourself. Don’t assume you know everything, but try your best anyway, and let the internet correct you when you are inevitably wrong. Wear your noobyness on your sleeve.

People think you suck? Good. You agree. Ask them to explain, in detail, why you suck. You want to just feel good or you want to be good? No objections, no hurt feelings. Then go away and prove them wrong. Of course, if they get abusive block them.

Did I mention that teaching is the best way to learn? Talk while you code . It can be stressful and I haven’t done it all that much but my best technical interviews have been where I ended up talking like I teach instead of desperately trying to prove myself. We’re animals, we’re attracted to confidence and can smell desperation.

At some point you’ll get some support behind you. People notice genuine learners. They’ll want to help you. Don’t tell them, but they just became your mentors. This is very important: Pick up what they put down . Think of them as offering up quests for you to complete. When they say “Anyone willing to help with __ __ ?” you’re that kid in the first row with your hand already raised. These are senior engineers, some of the most in-demand people in tech. They’ll spend time with you, 1 on 1, if you help them out (p.s. and there’s always something they want help on). You can’t pay for this stuff. They’ll teach you for free. Most people don’t see what’s right in front of them. But not you.

“With so many junior devs out there, why will they help me ?”, you ask.

Because you learn in public. By teaching you, they teach many. You amplify them. You have one thing they don’t: a beginner’s mind. You see how this works?

At some point people will start asking you for help because of all the stuff you put out. 80% of developers are “dark”, they dont write or speak or participate in public tech discourse. But you do. You must be an expert, right? Don’t tell them you aren’t. Answer best as you can, and when you’re stuck or wrong pass it up to your mentors.

Eventually you run out of mentors, and just solve things on your own. You’re still putting out content though. You see how this works?

p.s. Eventually, they’ll want to pay you for your help too. A lot more than you think.

a habit of creating learning exhaust

Dang, that hits me where I live.