In the last year I’ve gotten to know people who make some of the software I use. I love their work, and them for doing it. It makes my life, and the world, better for it. And as I get closer to their work, following mailing lists, bug trackers and internet noise, I realize just how hard it is to do what they do.

Software isn’t supposed to satisfy everyone, it is impossible, and that is an obvious conclusion, but you wouldn’t guess it from the reactions folks share when they are exposed to software. Another obvious, and perhaps even less occurring thought, is how it feels to create something and subsequently have it verbally torn apart publicly.

I know how it feels to rage on a missing feature. And to my great shame I’ve threatened to stop using software because some evil and faceless developer is attacking me personally (sorry folks who make Firefox for Android, I really do appreciate your work!). It puts me in a weird place where I can see why people say what they say (well, to a certain point), but also how casual violent and uncaring we can be in our criticism.

For my part, I am going to try to stop giving unhelpful criticism. I don’t want to hurt anyone, and if I can, I want to raise them up, so they can accomplish more for all of us; it is easy to do since I use free software. I am going to take my frustration and vent it to finding bug trackers, and giving real constructive feedback. And I am going to accept replies from developers and designers with a grain of salt, because they are likely being bombarded by less kind correspondence.

And as a bonus, I am going to suggest to others to do the same, so we have less folks swaying popular opinion with noxious attitudes, and more people helping all this software become the best it can be.

Re-reading MLK’s words, as I inevitably do every year on MLK Day, makes me think of non-violence as a totalizing and revolutionary ethos and how I can lead my life in some way closer to that ethos.

He said once, “Nonviolence is a powerful and just weapon. which cuts without wounding and ennobles the man who wields it. It is a sword that heals.”

I think this is developed from Jesus’s words that he is a sword that will divide families, which is misunderstood as an aggressive quote but I think is more about how Jesus demands total commitment and that commitment will divide his followers from their fellows.

Anyway, I appreciate that you are incorporating nonviolence into your social interactions, and like Martin I think that it is a sword that heals. 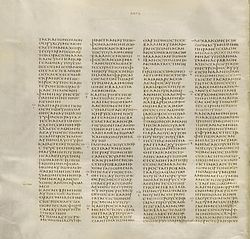 Matthew 10 is the tenth chapter in the Gospel of Matthew in the New Testament section of the Christian Bible. Matthew 10 comes after Jesus had called some of his disciples and before the meeting with the disciples of John the Baptist. This section is also known as the Mission Discourse or the Little Commission, in contrast to the Great Commission (Matthew 28:18–20). The Little Commission is directed specifically to the Jewish believers of the early church, while the Great Commission is to all na...

Thanks for posting this. I like hearing about things like ‘radical nonviolence’ and general ‘be nice to one another’ things because I need to be reminded that it’s effective, that it can change the world, and that it still requires a lot of work and effort.