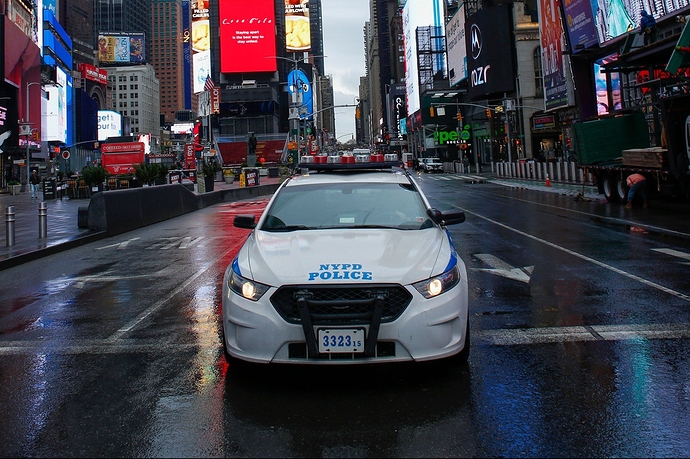 New York City police officers arrested three people in Brooklyn over the weekend after they allegedly “failed to maintain social distancing,” court documents reviewed by The Intercept show. The three individuals appear to be among the first in the city to be arrested over the Covid-19 mitigation measures — despite city officials promising that those disregarding the lockdown would face fines at most. Violating social distancing is not a crime per se, but each of the individuals arrested was charged with obstructing governmental administration, unlawful assembly, and disorderly conduct.

In a criminal complaint, police claim an informant observed a group of about 25 people “hanging out” in the Bedford-Stuyvesant neighborhood last Friday night and that the defendants “refused to leave the location and disperse” despite the informant repeatedly asking them to do so. But one of those arrested, a 37-year-old woman, disputed the facts described in the complaint, telling The Intercept that she had been in a parking lot with her boyfriend, who was also arrested, when she saw a group of people nearby dispersing into the street apparently after police ordered them to do so.

The woman, who asked not to be named because the charges against her remain pending, told The Intercept that a large group of officers, wearing no masks, approached her and her boyfriend and told them it was “time to leave,” then proceeded to grab her boyfriend before they could do so. The interaction quickly escalated and officers pepper-sprayed two people as a crowd gathered to watch what was happening. “They actually brought the crowd inside that parking lot once they started bothering me,” she said.

I’m in
](Join The Intercept’s Newsletter)

The woman was taken to the local precinct and then to central booking, where she shared a cell with two dozen other women for the next 36 hours. Only women who already had masks when they were arrested were allowed to keep them. There was no soap and the cell was dirty, but at one point an officer went around distributing drops of hand sanitizer to the women held there.

“They got us all bunched up in one cell,” the woman said. “Nobody gave us no tissues. Regular jail stuff. Once you go in there they are going to treat you like the scum of the earth.”

The woman was ultimately released on Sunday morning — but her employer has not allowed her back to work because of fears she was exposed to the virus while in detention.

Two weeks into the city’s lockdown, as the death toll continues to climb and New Yorkers come to terms with their newly restricted lives, it remains largely unclear whether and how people can be forced to comply with the social distancing measures so essential to slowing the spread of the virus.

Mayor Bill de Blasio said last week that those gathering in groups of any size or failing to keep 6 feet away from each other could receive police warnings. If they failed to disperse, or returned after police told them to leave, they could be fined $250 to $500. But as joggers continue to pack sidewalks and crowds gathered to watch a U.S. Navy hospital ship dock in the city, it has become clear that far too many New Yorkers are continuing to get too close to one another. This week, New York Gov. Andrew Cuomo threatened to make social distancing guidelines “a law” while calling on the NYPD to step up enforcement. “The NYPD has to get more aggressive. Period,” Cuomo said, taking a shot at the city’s administration, which oversees the police department.

The NYPD and the Mayor’s Office did not respond to a request for comment.

But as officials threaten harsher enforcement, critics warn that police are not the answer. They caution against a heavy-handed response that they fear will be doled out unequally across the city. And with hundreds of officers testing positive for the virus, and thousands more out sick, community advocates worry that a more aggressive response would unnecessarily expose scores of people to the disease. While a criminal charge for failure to socially distance does not yet exist, officers have a lot of discretion in their encounters with the public and can arrest people under vague charges like disorderly conduct, obstructing government administration, or resisting arrest. That means that police interventions meant to keep people at a distance could quickly escalate into physical, and possibly violent, interactions.

“It’s basically just setting up police encounters, and any police encounter does have some potential to escalate,” said Jennvine Wong, a staff attorney at Legal Aid’s Cop Accountability Project. “One of the failings right now is the NYPD has not been communicating very clearly to the public what their role actually is in policing during this time. A lot of people are not very clear.”

While advocates fear social distancing enforcement might lead to police escalation, they also warn of the serious health risks, to all involved, of close interactions between the public and police. More than 1,400 NYPD employees, including more than 1,000 officers, have tested positive for Covid-19 as of Wednesday. That puts the police department’s infection rate at at least 3.8 percent — far higher than the city’s overall 0.5 percent, and almost as high as Rikers Island, where the estimated infection rate stands at a staggering 5.1 percent, according to an analysis by Legal Aid.

The high rate of infection within the NYPD is in part explained by officers’ status as first responders, but it also raises questions about whether police officers should be interacting with the public, and each other, as closely as they have. In a sign that the virus is taking a heavy toll on the department, more than 15 percent of the force called out sick this week. Dermot Shea, the police commissioner, called that “a good thing,” saying “We don’t want anyone sick in the workplace working sick.”

But some have argued the city has done too little to protect officers — and thus anyone with whom officers interact. In mid-March, the Police Benevolent Association, the largest police union in the city, filed a complaint accusing the department of failing to provide officers with enough protective equipment. But as the virus continues to course through the department, many officers remain on patrol without masks or gloves, often standing closely to one another and approaching people without taking precautions. With nearly half the force living outside the city limits, those officers also risk becoming vectors of the disease into their own families and communities.

“The police are themselves both at risk of getting sick and at risk of spreading the disease to others,” said Alex Vitale, who runs the Policing and Social Justice Project at Brooklyn College. “Police need to practice social distancing.”

Vitale stressed the importance of New Yorkers avoiding close contact with each other, but called for community-based alternatives to pressure people to stay home.

That is particularly important in parts of the city that are already overpoliced — usually poorer neighborhoods of color where many aren’t able to work from home or are forced to share tight quarters with several others. “Not everybody can stay home during the pandemic,” said Josmar Trujillo, a community organizer in East Harlem. “Not everybody has a place to go home to and not everybody has a way to unwind or deal with the mental stress that comes with a lockdown.”

Trujillo feared that officials’ criticism of New Yorkers disregarding social distancing guidelines would translate into disproportionate enforcement against poor communities of color in particular, and noted for instance how officials have railed against “parties” and “DJs” and removed basketball hoops from the city’s courts. As he resisted closing public schools for weeks, de Blasio cited, among other reasons, the fear that teenagers would roam unsupervised in the city. Trujillo said that while police officers in wealthy neighborhoods might courteously educate New Yorkers to the need for distancing, he expects their approach to residents of poorer neighborhoods to be much more aggressive. “So on top of the unprecedent problem that we’re dealing with, the police can come and escalate and make things worse,” he said.

That compounds the perception by many in those communities that they have been left to fend for themselves in this crisis, he added.

“The problem is not that we shouldn’t be trying to distance people, but it’s the fact that there has been almost a complete absence of government,” Trujillo said. “If I just looked out my window, the only semblance of government that I would see would be the NYPD. You don’t see Health Department officials out here. You don’t see people sanitizing public spaces like they did in China. It’s a ghost town except for the police.”

Broken Windows Policing in a Pandemic

But as advocates have raised the alarm about city jails that have become petri dishes for the disease, and as the city has moved to release hundreds of people detained at Rikers, police have continued to make arrests over low-level crimes that critics say pose an unnecessary risk of contagion.

A comparison of arrest and arraignment data from cases Legal Aid represented during the last two weeks of March last year and this year shows that while arrests are significantly down, nearly 34 percent of arraignments this year continued to be over nonviolent offenses, petty misdemeanors, and violations, many for drug possession. That’s less than last year’s 58 percent, but “still a significant amount of cases that, quite frankly, didn’t need to come through central booking and didn’t need to come through arraignment to begin with,” said Wong, of Legal Aid.

On Sunday, the city released about 650 people from Rikers, bringing the total number of people there to under 5,000 for the first time in more than half a century. But attorneys said they continued to see police make arrests they said were particularly questionable in the current circumstances. In one instance, police recently stopped a man for playing loud music and then arrested him over a 10-year-old warrant for spitting. In another case this week, a homeless man was arrested for allegedly possessing synthetic marijuana and held for 30 hours before being arraigned and released.

“It’s pretty counterproductive to arrest somebody for that, because now you’re putting someone who is already vulnerable into a holding cell for hours and hours, and we have already heard stories about how unsanitary they are and how crowded it is, and how there is no way for people to actually wash their hands, socially distance, and follow CDC guidelines,” said Wong.

In the midst of a mass public health emergency, police should be focused on meeting that emergency — not making matters worse, critics argue. That should include putting in place measures to limit exposure during necessary interactions, but also curtailing police interventions to strictly essential ones. Several police departments have taken steps to do so, for instance by instructing officers to respond to certain calls by phone. Meanwhile, district attorneys in cities like Philadelphia and San Francisco are declining to prosecute some low-level offenses. But so far, New York has done neither — and police and prosecutors have pushed back against calls to release people from jail, prompting a rare public rebuke from Rikers’ own chief medical officer. “They really think that if they let anyone out of jail, if they let up for ten seconds on broken windows policing, that there’s going to be rioting in the streets,” said Vitale.

But the NYPD’s failure to adapt its policing to the crisis at hand puts the city’s public health in even greater danger, advocates say.

“We want them to modify their protocols to reflect the fact that we are in the middle of a public health emergency, we are at the epicenter of this pandemic,” said Wong. “Other cities with far fewer cases have already decided that it is not only in the community’s best interest, but also in the best interest of the individual officers to decrease instances of police encounters with civilians — because we don’t know who has it and who doesn’t.”