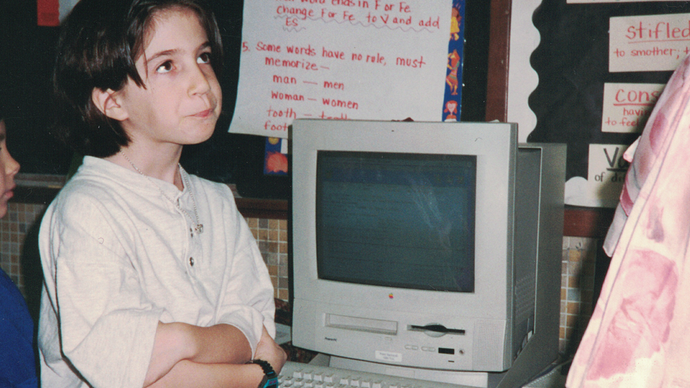 It seems like everyone's obsessed with Nintendo's hit Animal Crossing right now. But writer Hannah Epstein is thinking about a game she loved as a kid — the text-only virtual world of MOOSE Crossing.

Gaming headlines are dominated right now by Animal Crossing: New Horizons , the long-awaited sequel in a video game franchise known for — among other things — its realistic portrayal of the passage of time. I’d never heard of Animal Crossing until a few days ago but like many of us, I have suddenly become intimately acquainted with the actual passage of time. I understand the appeal of being able to dip in and out of a benign fantasy world at a time when our own reality feels so foreboding. Many years ago, at a computer desk much like this one, I spent my formative years playing a coincidentally-named predecessor.

My dad worked in software development during my childhood. Though he didn’t follow sports, he staunchly supported an underdog company called Apple Computers at a time when everyone else had PCs. Our house had a steady influx of computer games with names like Cosmic Osmo and Spelunx. When a friend asked what my dad did for work, I replied simply that he wrote emails. But computers still mystified me – what I cared about was that his coworker converted old monitors into fish tanks that occasionally ended up in my first-grade classroom. Eventually, my dad pursued a graduate degree in technology and education, during which he met many like-minded researchers. That’s how we wound up on MOOSE Crossing.

A multi-user, virtual reality environment, MOOSE Crossing lived on a server at MIT in the late 90s. Its creator, a then-doctoral student named Amy Bruckman, had developed it as an exploratory learning tool for children and the basis for her dissertation. The project coalesced at a time when the Net had yet to fully snake its way across America’s classrooms, and many teachers and administrators were finding themselves at a loss for how to harness its educational potential.

MOOSE Crossing allowed young writer-programmers to create their own virtual objects and leave them strewn about a virtual landscape for others to encounter. Kids could also interact directly with one another through custom personas of their own making. Moderated by a team of friendly grad students, its whole point was that there was no point — it was a canvas for creativity and collaboration. To complicate matters, or to simplify them, the entire interface consisted of monospaced text on a white background.

The idea that a program completely devoid of graphics could captivate a nine-year-old seems outlandish these days. I attempted — poorly — to explain the experience to my girlfriend as we hiked in Maine last fall. How I’d spent hours exploring a seemingly endless infrastructure of rooms and spaces, built a treehouse, made friends whose faces I never saw and whose real names I’ll never know, used the rudimentary coding language to teach my pet robot to respond to key words in conversation. My tour de force was a fully functional cafe that exclusively sold different flavors of hot chocolate.

“But you can’t actually see anything and you’re not actually going anywhere,” she said, confused. “You’re just reading !”

The idea that a program completely devoid of graphics could captivate a nine-year-old seems outlandish these days.

Though accurate, her observation couldn’t capture the buoyancy I felt as I sat mouth-breathing at my computer, describing and describing my little slice of that world with gusto. As an only child, I feared boredom above all else, but instead I found possibility in the blankness of MOOSE Crossing. I challenged myself to conceptualize things that hadn’t already been created by my peers, an ASCII version of Harold and the Purple Crayon writing the path beneath my own feet.

The world needs imagination and collaboration now more than ever. Two nights ago, my friends and I ended our Zoom hangout early, because the abundance of screen time had given us headaches. We are all at a frightening crossroads of solitude and inundation, and we’re seeking comfort in the familiar. Indiana Jones and Lord of the Rings are trending on Netflix. Animal Crossing offers a pastoral hamlet where the only bugs of note are friendly insects rather than insidious germs. With the deluge of bad news, looking backward feels much safer than looking forward. And yet for so many people, a return to the status quo would offer no respite.

Let’s tune out the onslaught for just a moment and assume that our virtual houseplants, as well as our real ones, will survive without our attention. Not to avert our gaze, but to remember that in order to demand a different reality, we must first allow ourselves to imagine one.

wait what? i thought this was for SURE going to be a single-player text adventure game or something

its whole point was that there was no point

I attempted — poorly — to explain the experience to my girlfriend as we hiked in Maine last fall. How I’d spent hours exploring a seemingly endless infrastructure of rooms and spaces, built a treehouse, made friends whose faces I never saw and whose real names I’ll never know,

despite having graphics now, i regularly have a similar experience while talking about doing stuff in video games to non-gamers lol

used the rudimentary coding language to teach my pet robot to respond to key words in conversation.

as I sat mouth-breathing at my computer, describing and describing my little slice of that world with gusto.

Harold and the Purple Crayon

i’d forgotten about this

this is also amazing

anyway, thank you for sharing this!