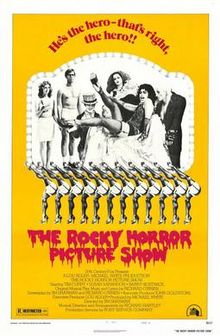 The Rocky Horror Picture Show is a 1975 British-American musical comedy horror film by 20th Century Fox, produced by Lou Adler and Michael White and directed by Jim Sharman. The screenplay was written by Sharman and actor Richard O'Brien, who is also a member of the cast. The film is based on the 1973 musical stage production The Rocky Horror Show, with music, book, and lyrics by O'Brien. The production is a parody tribute to the science fiction and horror B movies of the 1930s through to the...

there is a lot of stuff out there about this particular cult favorite. i just wanted to record that i watched it for the first time maybe a month ago, and i was surprised it took me so long. i’ve definitely done the time warp again without knowing that song was from this show. (one memorable time warp dance experience was when i learned or relearned it by following everybody else while on roller skates at the church of 8 wheels like 4 years ago.) my roommate was in the mood to watch it and then found out i hadn’t seen it before, and boggled mightily at that, so we watched it together. it was fun! it was confusing! i was confused! also tim curry has such amazing legs!

i do have a burning question. why does this work while Repo: the Genetic Opera (2008 film) doesn’t? it is funny that i saw repo before i saw rocky horror, and although rocky horror has much greater name recognition, it was impossible for me to not keep comparing the two. they’re both utterly unapologetic, which i do like, haha. and they both try really hard, they both have lavish/amazing/bizarre/fantastical/scifi costumes/plots/premises, and they’re both absurd (and they’re both musicals). so how come rocky horror has become a cult favorite, referenced in all kinds of pop culture i’ve seen from movies to video games, and the repo is #marginalia?

is it the songs? their catchiness, their ability to hook you?

is it a bunch of things?

for me, it almost feels like… repo takes itself too seriously and the numbers are too long, even though we know it’s camp, while rocky horror is like exuberant and bouyant. it has its dark notes, definitely, but it doesn’t try to be like “now you must feel sadness for the poor girl” like repo does haha. do i not like pathos in my camp, or something?

what do yall think?

I don’t know about Repo. Does it celebrate freaks and geeks and the freaky geeky spectrum of freaky-geeky like Rocky Horror?

Also, I could have swore there was a movie called Repo with Deadpool getting loaned body parts back. Is that related? ((I love having places I can just ask questions without looking it up!))