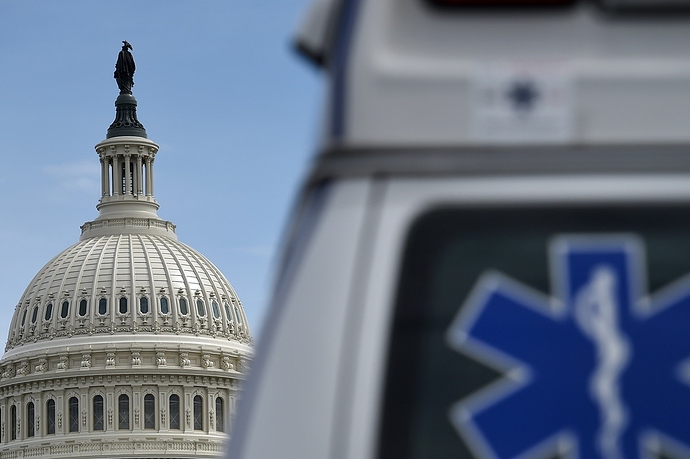 It’s a Scandal That We Don’t Know Who Supported the Coronavirus Bailout. Help...

The Intercept is reconstructing the roll call vote for the CARES Act, and we need your help.

The House of Representatives last month swiftly passed the CARES Act, a $2.2 trillion spending bill, one of the largest stimulus measures to date, with only three hours of debate and no recorded vote. Speaker Nancy Pelosi, D-Calif., and Minority Leader Kevin McCarthy, R-Calif., reportedly mobilized lawmakers to agree to the unconventional method for passing the CARES Act.

The measure — a response to the economic crisis sparked by the coronavirus pandemic, which includes limited safety net provisions for individuals and unprecedented corporate bailout funds for a range of industries — passed on March 27 and was signed into law by President Donald Trump later that day. The decision to usher the legislation through by unanimous consent “voice vote,” a procedure typically reserved for uncontroversial legislation, such as the naming of post office buildings, meant that there is no record of how each lawmaker voted.

Knowing how every member of Congress would have voted on the CARES Act is a crucial measure of basic democratic accountability. The public deserves to know where lawmakers stand on the most important legislative decisions impacting the nation. The “voice vote” gambit only obfuscates the policymaking process and eliminates transparency.

The Intercept has collected prominent public statements by individual members of Congress, but we also need readers to help us contact every lawmaker over phone, email, or social media. The chart below lists how each House member has indicated they would have voted, based on publicly reported information, along with those whose vote remains unclear. So far, Rep. Alexandria Ocasio-Cortez, D-N.Y., one of the few critics of the bill, is the only known House Democrat to oppose it. The freshman lawmaker decried the CARES Act as one of “the largest corporate bailouts” in “American history” that only provided only “crumbs for our families.”

This will serve as an important historical record, as pivotal as the vote on the Iraq War, the 2008 bank bailouts, and the Affordable Care Act. And it will make it clear to members and congressional leadership that the public will hold them accountable for their actions during this crisis, as even more crisis-related measures are under consideration.

Already, legislative leaders are preparing to normalize voice votes to authorize another wave of multibillion-dollar stimulus legislation. On Tuesday, Senate Majority Leader Mitch McConnell, R-Ky., announced that the Senate would attempt to move forward with a new round of emergency spending legislation passed through an unrecorded voice vote.

“The CARES Act vote will likely be one of the most consequential of our generation,” said David Segal, executive director of Demand Progress, a watchdog group that is also pushing to force lawmakers to go on record for coronavirus response legislation. “We need to make it clear to congressional leadership and rank-and-file representatives that they’ll be held accountable for how they voted on it and how they vote through the remainder of this crisis.”

The decision to use unanimous consent by voice vote was justified as necessary to protect lawmakers who could not travel to Washington, D.C., because of potential health risks. But procedures could have been implemented to allow distance voting in an emergency. After the Senate voted 96-0 to approve the bill, House Speaker Nancy Pelosi, D-Calif., formally rejected voting by proxy voting or any move toward electronic voting in the run-up to the vote. On the day that the House took up the CARES Act, Majority Leader Steny Hoyer, D-Md., stated that he had called enough lawmakers back to form a quorum and implemented a special rule for unanimous consent.

Rep. Thomas Massie, R-Ky., was the only lawmaker to formally object, demanding evidence that a quorum was present and calling for a recorded vote. The protest lasted less than one minute and 30 seconds. Rep. Anthony Brown, D-Md., the presiding officer in the House on March 27, rejected Massie and, within moments, the bill cleared the House.

Ocasio-Cortez, who called the legislation a “shameful” corporate bailout in an impassioned floor speech that went viral, would have voted against the bill, her office confirmed. In an interview with “Democracy Now” on Tuesday morning, Ocasio-Cortez said she wouldn’t “slight any member for how they voted,” but “could not bring myself to ultimately support this bill, because I believe that people will soon see the extraordinary asymmetrical assistance that went to corporations.”

“We’re not just talking about half a trillion dollars that went to Wall Street, as I mentioned in my remarks,” she continued. “That is being leveraged to $4 trillion for Wall Street and corporations. And what we’re seeing in payroll protection for small businesses is just a drop in the bucket compared to that.”

The Intercept’s roll call is in progress below. If you have information about the position taken by your congressperson or any congressperson on this list, fill out our survey here. Please include evidence of the lawmaker’s position — a screenshot of an email or a link to a tweet or online statement. We’re also interested in whether your congressperson was present for the vote.

The roll call is a table of votes, at the same URL.