Rhythmbox, either from the last version, or a new buggy version, rewrote all the tags in my music collection. It appears to have pushed the album name down to the album below it... at any rate, I am starting over and doing something else.

First of all, I am now using cmus. That means I no longer care about album art, which means I really am admitting that I am addicted to complete sets of data, and have never cared about album art.

I keep all my music in high-definition (meaning FLAC in my case) on an external drive, so I started creating a collection of Opus files. Well, although cmus supports Opus, I can't get the version in Ubuntu Gnome to play them (and it isn't listed as a plugin). While I don't think it would be an issue to compile my own version, I don't doing that if I can avoid it. VLC plays them fine, but I've never been able to get the Media Library feature working, and am not even sure what it does when it does work.

I am falling back on Vorbis. And with the .ogg extension; cmus won't recognize .oga. Meh.

Something that I found handy, which I am surprised I never searched for before: Audio Tag Tool (that site is almost completely useless). 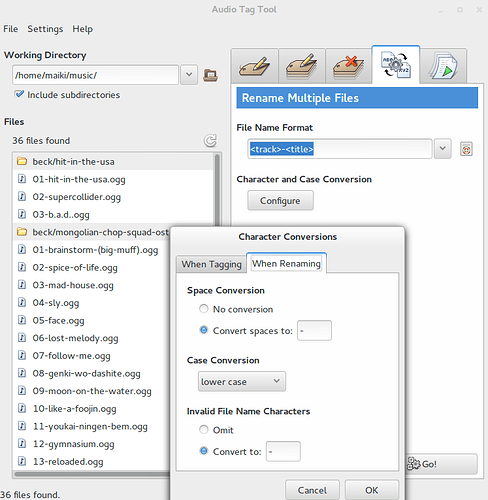 I prefer all my files to be in lowercase with hyphens separating words. For music I normally apply this pattern to directories, but it is too tedious for me to figure out how to batch write it to all the files. And I have a lot of kana in my music library, so that makes it even more complex. tagtool basically does that, along with some light tag editing (my music was tagged correctly a long time ago).

Something I found out is that ownCloud has a bug that will delete certain files if it can't read the name properly. I don't think they've figured it out, but it has affected a few folks, and it deleted an entire album that was in Japanese. I know this, because the sync client told me it removed it in a notification.

Until I can figure that out, I probably won't sync my music, but I've found that I don't listen to music except when I am near my laptop, either at home or at the hub. As a pedestrian in a new city, I find listening to music isn't as fun as listening and observing more fully.