Precarity is the condition of being vulnerable to others. Unpredictable encounters transform is; we are not in control, even of ourselves. Unable to rely on a stable structure of community, we are thrown into shifting assemblages, which remake us as well as our others. We can’t rely on the status quo; everything is in flux, including our ability to survive. Thinking through precarity changes social analysis. A precarious world is a world without teleology. Indeterminacy, the unplanned nature of time, is frightening, but thinking through precarity makes it evident that indeterminacy also makes life possible.

The only reason all this sounds odd is that most of us were raised on dreams of modernization and progress. 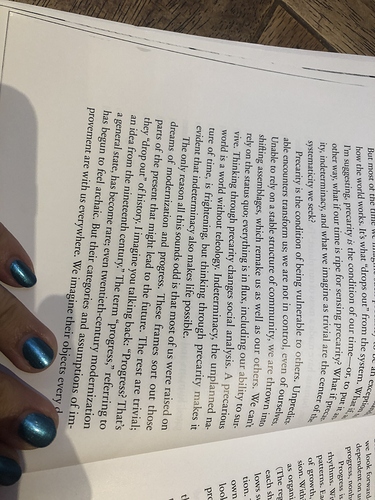 from this passage, i have no idea what teleology is. my guesses include: order? hierarchy? a schedule? shrug? 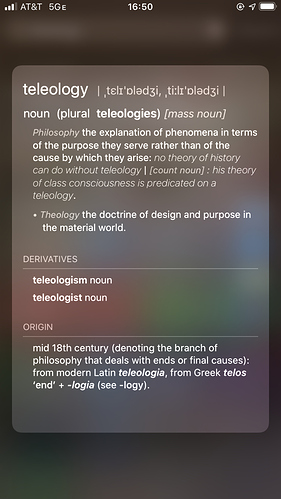 from the wikipedia article, Teleology - Wikipedia :

Teleology or finality [1][2] is a reason or explanation for something as a function of its end, purpose, or goal.
…
In other words, because human cognition and learning often rely on the narrative structure of stories (with actors, goals, and proximal rather than distal causation), some minimal level of teleology might be recognized as useful or at least tolerable for practical purposes even by people who reject its cosmologic accuracy.

hmm.
Off-topic: the word “precarity” is not in my iOS dictionary spell-checker. It has the little red dotted underline.

It might be useful to look at the greek concept telos from which teleology is derived. I found teleology easier to grok once I groked telos.

A telos (from the Greek τέλος for "end", "purpose", or "goal") is an end or purpose, in a fairly constrained sense used by philosophers such as Aristotle. It is the root of the term "teleology", roughly the study of purposiveness, or the study of objects with a view to their aims, purposes, or intentions. Teleology figures centrally in Aristotle's biology and in his theory of causes. The notion that everything has a telos also gave rise to epistemology. It is also central to some philosophic Te...

Fun fact, my current Majimonsters campaign with the local game group, features telos as kinda the big bad. (less bad more of a force of nature?) The players are just now starting to wrap their head around it.