a guildie told me about this after we talked a little bit about opera. he would like me to know that opera is NOT all doom and gloom!

in this opera, there’s a doll. the soprano playing the doll sings this song twice. my guildie says:

It’s sung twice: first strictly, measured and mechanical, then a second time with more spirit and flair. The soprano has a lot of freedom in how she interprets the second part.

first watch https://youtu.be/sXK3pUdBRGA
as an example of a performance.

then watch https://youtu.be/CHp4LLnlKIg
this performance is remarkable because the soprano was the understudy, and she had four hours notice, and she came in and blew everybody away. from her wikipedia entry:

Rachele Gilmore (born in Atlanta) is an American coloratura soprano.

She made her debut performing in the Metropolitan Opera on 23 December 2009 as understudy for Kathleen Kim in the role of Olympia in the opera The Tales of Hoffmann . She had less than four hours’ notice that she would sing that night, and the curtain was even briefly held past 20:00 to allow her to walk the stage.[1] She interpolated a high A-flat (A♭6) into Olympia’s aria, which, at the time, was conjectured to be the highest note to have ever been sung on the stage of the Met.[2]

i haven’t yet, this is a to-do for myself i watched them! it was really fun =) what an ecstatically difficult piece! howwww! is it even possible! to sing!??!!

in gilmore’s video, you can see the cast members going past pretending to be impressed in-character, and becoming flat-out shocked at her additions in the second run-through. i laughed so hard that i had to stop and take a screenshot. this guy is FUCKIN SHOOK 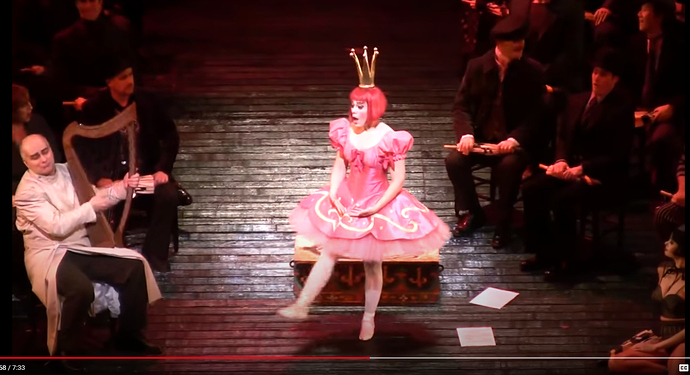 what a joy. and what a long ovation!

divas. i love to love them.

“The birds in the bower,
The star of daylight in the sky.
Everything speaks to a young girl of love!
Ah! This is the sweet song,
The song of Olympia! Ah!

Everything that sings and sounds
And sighs, in its turn,
Moves her heart, which trembles with love!
Ah! This is the darling song,
The song of Olympia! Ah!”

ok, so about copyright. the uploader of this video says they re-uploaded it, and left this comment on the video:

As for why the old link is now set to private, my guess is the Met made a DMCA claim, as they did against this video when I uploaded it, but I fought it and won (citing sections 1, 3, and 4 of the Fair Use guidelines). Most people don’t challenge DMCA claims and just let Youtube take down the video / make it private. Kind of foolish of the Met imo - It’s clear to me that having this video on YT increases, rather than decreases, interest in Ms. Gilmore?

this person challenged the DMCA claim and lived to tell the tale? this is the first time i’ve ever spotted this actually happening in the wild???