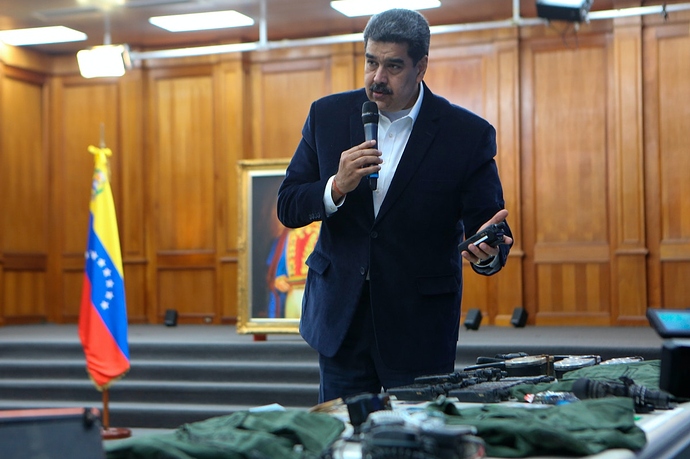 Venezuela has faced enduring hostility from Washington due to its huge oil reserves and its opposition to U.S. policy and capitalism. 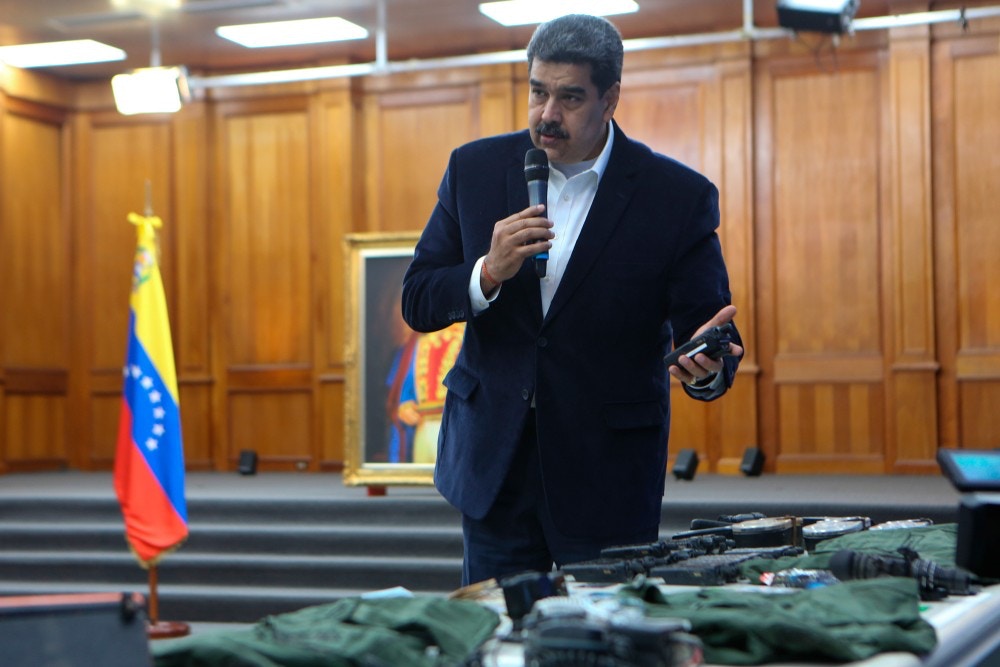 This photo released by the Venezuelan Miraflores presidential press office shows President Nicolás Maduro speaking over military equipment that he says was seized during an incursion into Venezuela, during his televised address from Miraflores in Caracas, Venezuela, on May 4, 2020.

Picture the following scene: Two former Venezuelan special forces soldiers are captured while trying to land on a beach in the United States. They confess on camera to being part of a wider plot to capture and kidnap the American president.

That same day, back in Venezuela, another ex-special forces soldier with connections to the longtime bodyguard of Venezuela’s president, Nicolás Maduro, releases a video announcing the two men were working for his private security company, on a mission to detain and extract President Donald Trump and bring down the government in Washington, D.C.

Two days later, the Venezuelan foreign minister, who also happens to be the former head of the country’s feared intelligence agency, gives a press conference at which he chooses to deny only “direct” involvement in the operation. “If we had been involved, it would have gone differently,” he added, with a smirk.

What do you think the reaction would be here in the United States? Among political and media elites? In national security circles? Wouldn’t the U.S. press be running endless pieces denouncing and berating Maduro? Wouldn’t cable news be rolling on it? Does anyone doubt that the U.S. military would be preparing to attack targets across Venezuela in retaliation?

Yet that is exactly what we have witnessed over the past week — but in reverse, and without any sense of shock or outrage in the United States. 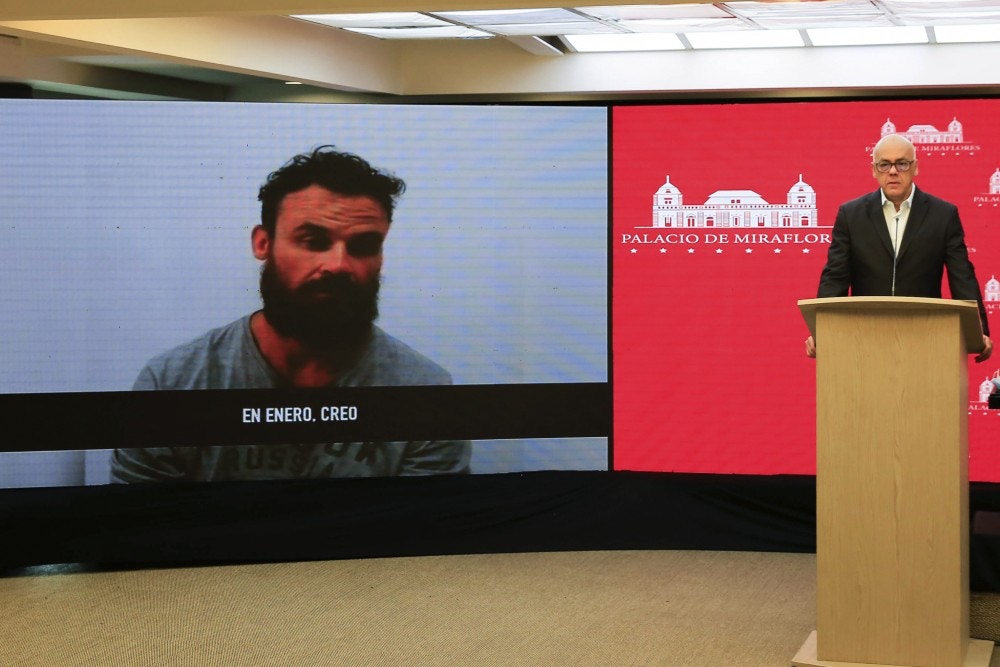 In this photo released by Venezuela&#39;s Ministry of Communication, Jorge Rodriguez shows a video of American Airon Berry, a former U.S. special forces soldier associated with the Florida-based private security firm Silvercorp USA, during a televised statement in Caracas, Venezuela, Thursday , May 7, 2020. Three Democrats on the Senate Foreign Relations Committee are demanding answers from the Trump administration about how much it knew about an attempted raid to capture Venezuelan President Nicolas Maduro, an operation they said potentially violated U.S. law and ran counter to American support for negotiations to end the country&#39;s political standoff. (Venezuela&#39;s Ministry of Communication press office via AP)1000×667 108 KB

In this photo released by Venezuela’s Ministry of Communication, Jorge Rodriguez shows a video of American Airan Berry, a former U.S. special forces soldier associated with the Florida-based private security firm Silvercorp USA, during a televised statement in Caracas, Venezuela, on May 7, 2020.

On Monday, it was Venezuela that captured two former U.S. special forces soldiers, Luke Denman and Airan Berry, after what authorities described as their “botched beach landing in the fishing village of Chuao.” A video was released of Denman telling his interrogators that he had been tasked with capturing the Venezuelan president. Meanwhile, Florida-based ex-Green Beret Jordan Goudreau, head of the private security firm Silvercorp USA, appeared in a video alongside a former Venezuelan military officer in combat fatigues, in which he confirmed that Denman and Berry were working for him. (Press reports have since revealed that Goudreau had meetings with former longtime Trump bodyguard Keith Schiller, had signed a multimillion-dollar contract with the U.S.-backed Venezuelan opposition, and also claims to have been in contact with the office of Vice President Mike Pence.)

On Wednesday, Secretary of State Mike Pompeo, a former director of the CIA, spoke at a press conference where he issued his very carefully worded denial: “There was no U.S. government direct involvement in this.” He also couldn’t help but brag to reporters about how it “would have gone differently” if the United States had been behind it. (Memo to Pompeo: Google “Bay of Pigs.”)

Who knows? Perhaps Washington wasn’t involved this time. Perhaps Trump is correct to say that this particular fiasco, which sounds like the plot of a bad Hollywood movie, “has nothing to do with our government.”

Then again, this is an administration of liars, fabulists, and grifters. Dishonesty is the hallmark of the Trump White House. Their denials, therefore, are pretty worthless.

Plus, there is the recent history to consider: the demonization and strangulation of Venezuela has been a bipartisan project in Washington, D.C., since the rise of Hugo Chavez and the socialist “pink tide” in the late 1990s. In 2002, the Bush administration encouraged and supported a (failed) coup against Chavez. (As I later reminded former Bush official Otto Reich — who was accused of meeting with the plotters beforehand — the CIA had warned him and his colleagues that a coup attempt would be made five days before it occurred!).

In 2015, the Obama administration made the absurd decision to formally declare Venezuela an “unusual and extraordinary threat” to U.S. national security. At the time, the United States was 11 times bigger in terms of population, 600 times richer in terms of GDP, and with a military budget 1,800 times the size of Venezuela’s.

In 2019, the Trump administration called Maduro “illegitimate” and recognized opposition leader Juan Guaidó as the interim president of Venezuela. So far this year, Washington has indicted Maduro on charges of narco-terrorism; refused to suspend crippling sanctions on Caracas despite the spread of Covid-19; and deployed U.S. warships near Venezuela in what has been described as “one of the largest U.S. military operations in the region since the 1989 invasion of Panama to remove Gen. Manuel Noriega from power.”

Regime change is the explicit policy of the U.S. government.

To be clear: The regime in Caracas is brutal, autocratic, and corrupt. More than four million Venezuelans have fled the country in recent years; the president’s approval ratings hover around 10 percent.

But anyone who claims that U.S. opposition to Maduro is based on a concern for democracy or human rights in Venezuela is either dishonest or deluded. The United States has a long history of supporting strongmen around the world — and especially in Latin America. Think Gen. Efraín Ríos Montt in Guatemala. Or Gen. Augusto Pinochet in Chile. Or Gen. Jorge Rafael Videla in Argentina. The list goes on and on.

No, the real reason the United States is obsessed with toppling the government in Caracas is, of course, because Venezuela has the world’s largest oil reserves — but leaders opposed to both the United States and capitalism. In fact, Trump and his cronies have a habit of saying the quiet part loud. As former acting FBI director Andrew McCabe revealed in his book, “The Threat,” at a briefing with intelligence officials in 2017, Trump asked why the U.S. wasn’t at war with Venezuela, pointing out how “they have all that oil and they’re right on our back door.”

In January 2019, Trump’s national security adviser at the time, John Bolton, told Fox Business: “It will make a big difference to the United States economically if we could have American oil companies really invest in and produce the oil capabilities in Venezuela.”

We do not know whether Trump and Co. were involved in the Goudreau-inspired attempted attack on Maduro. What we do know, though, is that they continue to try and starve and bully Venezuela into submission. If the Trump administration gave a damn about the people of that country, it would heed calls from everyone from the pope, to the U.N. high commissioner for human rights, to a group of congressional Democrats, to suspend sanctions and help Caracas fight the spread of the novel coronavirus.

But it won’t — because it doesn’t.

What the fuck is happening.