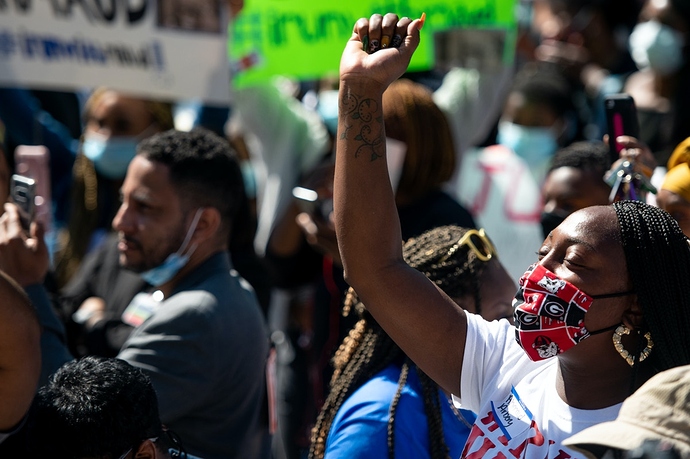 The Perversity of Needing to See Ahmaud Arbery Die on Video to Recognize That...

It is its own grave affront that the circulation of intolerable scenes of brutality against black people remain necessary. 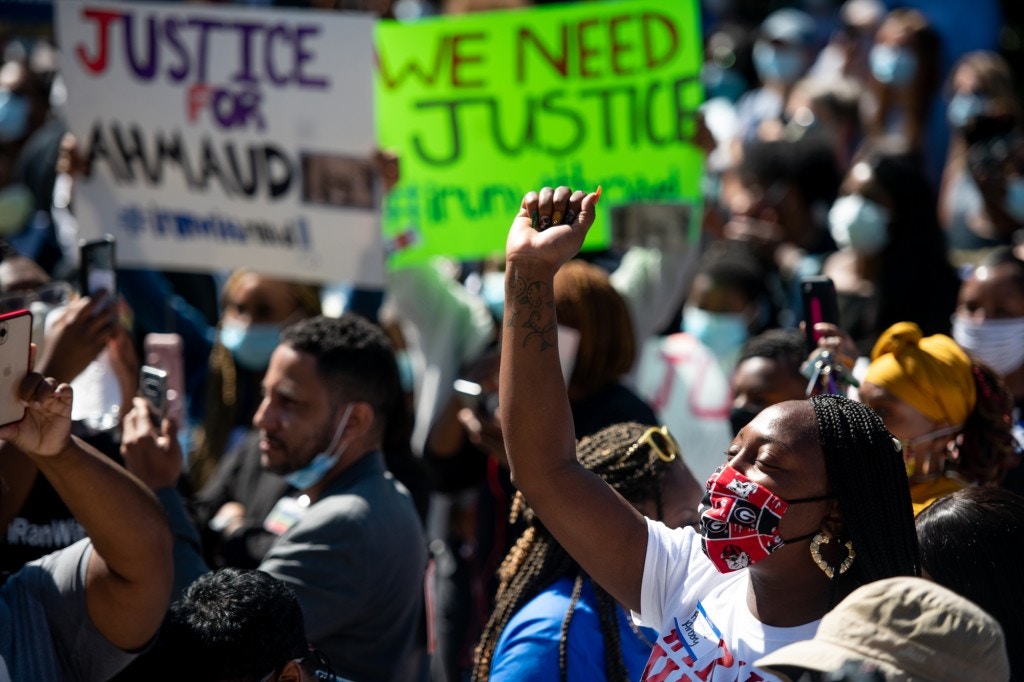 BRUNSWICK, GA - MAY 08: Demonstrators protest the shooting death of Ahmaud Arbery at the Glynn County Courthouse on May 8, 2020 in Brunswick, Georgia. Gregory McMichael and Travis McMichael were arrested the previous night and charged with murder. (Photo by Sean Rayford/Getty Images)1024×682 128 KB

Demonstrators protest the shooting death of Ahmaud Arbery at the Glynn County Courthouse on May 8, 2020 in Brunswick, Ga.

On Thursday, the Georgia Bureau of Investigation charged Ahmaud Arbery’s killers with murder and aggravated assault. There can be little doubt that, without the viral spread of a video capturing Arbery’s harrowing final moments, no such charges would have been brought.

Arbery, a 25-year-old black man, was shot dead in February while jogging, hunted by a white father and son in a truck. Over two months had passed, and no charges had been filed by the local district attorney’s office. Within a day of the video surfacing, garnering millions of views and provoking mass outcry, the GBI began its own investigation. A day later, Gregory McMichael, a former investigator with the Brunswick district attorney’s office, and his son Travis were arrested and booked into jail.

Why is it still necessary that the world see a black life violently cut short for any institutional recognition that black lives should matter?

Once again, it took no less than the intolerable spectacle of a black man’s execution in public view, spread far and wide, for the state to consider — or be compelled to consider — even the possibility of consequences for those who so readily took his life. Why do we need to exhibit and share the brutal death of a black man for it to be asserted that he was murdered? Why is it still necessary that the world see a black life violently cut short for any institutional recognition that black lives should matter?

When Gregory and Travis McMichael saw a black man jogging in their quiet neighborhood, it’s difficult to imagine that they saw a human whose life would be registered as a loss if taken. Instead, they saw a criminal threat, grabbed their guns, and gave chase. When the police and prosecutors originally in charge of the case said that there was “insufficient probable cause” for arresting the killers and that Travis McMichael was “allowed to use deadly force to protect himself” against the unarmed victim, they asserted that Arbery’s life was not a life worth preserving. It was not enough for his loved ones to demand justice. Millions of people had to bear witness to the extreme footage of a lynching, and to demand action, for the state to begin to register that Arbery’s life had value.

Arbery’s mother, Wanda Jones, told CBS News that she hopes the video footage “proves” that her son “was not committing a crime. He was out for his daily jog and he was hunted down like an animal and killed.” S. Lee Merritt, a lawyer for Arbery’s family, noted, “The series of events captured in this video confirm what all the evidence indicated prior to its release” — which is to say, it should not have taken the viral proliferation of this footage for the state to pursue the case.

The McMichaels have been charged, but the existence of a damning video is no assurance that the state will find them guilty. The racist logic of Georgia’s “stand-your-ground” laws may well determine that the father and son were justified in claiming self-defense against the black man they pursued. We know by now that the white men in these cases get to be the “self” deemed worthy of defense; Arbery was accorded no such selfhood, no such presumption of a life worth defending. Video evidence does not change that.

We watched Philando Castille bleed out in his car after he was shot by a cop, as his desperate girlfriend filmed; we watched Eric Garner gasp for breath as a New York police officer choked the life out of him; we watched Tamir Rice, aged 12, be gunned down by police as they leapt from their cruiser. None of the cops in these filmed killings were convicted; most weren’t even charged. Videos of black people being summarily executed are hardly rare. And hardly ever do killer cops and racist vigilantes face significant consequences.

Videos of black people being summarily executed only exist in the first place because black life is consistently exposed to brutal violence, particularly police violence.

Of course, such videos only exist in the first place because black life is consistently exposed to brutal violence, particularly police violence. Yet it should not go unnoticed that news of the brutal murder of a white person, especially a straight, cisgender, middle-class white person, does not require the accompaniment of horrific images to be publicly marked as a vile injustice. Indeed, it is more common for family members and loved ones to call for the removal of footage of white corpses and executions on the grounds that such imagery is found to be dehumanizing. Consider, for example, the opprobrium directed at tabloids that published still frames of white journalist Alison Parker moments before she was shot on camera by an ex-colleague in 2015.

If images of violent death are deemed dehumanizing in such cases, it is because the victim was already humanized in life. What, then, does it say about the institutional dehumanization of black life that families and justice advocates must publicize the most brutal images of murdered black people to demand that those lives be recognized and valued?

So little has changed. In 1955, Mamie Till insisted on an open casket to show the murdered, brutalized body of her 14-year-old son, Emmett, who was lynched after being falsely accused of inappropriate flirting with a white woman. “Let them see what I have seen,” said the grieving mother. Images of his battered face circulated in magazines and newspapers; thousands of people visited his open casket. The two white brothers who beat him to death were acquitted by an all-white jury.

The circulation of intolerable scenes of brutality against black people remains necessary. Without it, there is rarely public and official recognition that the taking of a black life, simply because of the person’s blackness, is an injustice. Yet such recognition is no assurance of justice. Indeed, even if the McMichaels are found guilty of murder, this cannot be called a circumstance of justice. There can be no justice while the conditions for racist lynchings persist, while black communities are forced to share the most violent images of what happened to their loved ones to assert that their lives mattered.

Ahmaud “Quez” Arbery, according to his obituary, “was humble, kind and well mannered. He always made sure he never departed from his loved ones without an ‘I Love You.’ He had a smile that would light up a room.” He loved sports and telling jokes. As footage of his execution virally spread, so, too, did photos of him in life, with a dazzling smile. It is its own grave affront that the photos of that smile, the sheer fact of that life, were not enough to get the wheels of justice moving.