Walkie talkies for local community use

My questions concern how to start. I know eventually we’ll want to move into larger radio systems (such as the stuff going on in assorted ham radio thoughts).

Our apartment is on a hill overlooking a lake, so we have good coverage for some types of signals.

What devices should I look for, for our family to ping each other while some of us are out in the park?

What is the range you’re looking for? A few blocks? The city of Oakland? My house to yours? lol

i am duckduckgoing to find some reviews!

I’m looking at The Best Walkie-Talkies for 2020 | Digital Trends first. Let’s start at the bottom of this article.

FRS stands for Family Radio Service and operates between 462-467 MHz. The technology owes its existence to Radio Shack, which successfully lobbied the Federal Communications Commission in the 1990s to allow manufacturers to produce radios with preset channels within that frequency band. The change permitted walkie-talkies to have exceptional range, with far less interference. Users are limited to a power of two watts on these channels, and there is no license required to use these frequencies. Channels 8 through 22 on your radio are FRS frequencies.

I had no idea about Family Radio Service until reading about it in this article just now. That’s great!

GMRS stands for General Mobile Radio Service, and is like an FM version of the CB radios of the 1970s and 1980s. Much higher power outputs are permitted — up to 50 watts — which results in much longer ranges. You cannot use these channels or GMRS equipment without a license –that costs $70 and is good for 10 years. With the license, you’ll also be able to use eight repeater channels located on channels 23-30, which allows you to use the radio for conversations beyond “line of sight.”

I had also never heard of GMRS.

Finally, Amateur Radio offers a group of frequencies from shortwave to microwave that requires you to pass a series of tests to gain access to more and more frequencies. Thankfully, you’re only required to take and pass one test to use the frequencies that these handheld radios operate on. The advent of FRS and GMRS has made it unnecessary to get your ham radio license (some ham radio channels are quite close to the FRS/GMRS frequencies), but ham radio frequencies are far less crowded and it’s easier to find a clear frequency to communicate than either FRS or GMRS, especially in more urbanized areas.

As I’ve noted elsewhere in talkgroup, I have my Amateur Radio license =) If you and Susan and Clover got yours too, we could all use it to talk! And we could use repeaters to get around distance and hills! lol.

Let’s start with FRS, though. With that in mind, here’s a look at every radio they review.

Baofeng UV-5R
…
With this particular radio, with no channels like most of the rest of our recommendations, you will need to ensure you have the proper licensing (if necessary) to transmit.

So nixing this one for now. But it should be a good option if you get a ham radio license.

Motorola T100 Series Talkabout
…
This device lets you communicate over a theoretical range of up to 16 miles, but our experience found them to work best when less than five miles apart.

it looks cuter than the midland gxtblabla.

Midland X-Talker T20X4
…
While Midland claims a range of 16 miles, you’ll get the best results as long with a mile or two range. The “stubby” antenna on the device is to blame here; it isn’t the best for long-range communication. If you’re looking for something to communicate over longer distances, look elsewhere.

ah, a different midland later in the list. these are the cutest of all, but yeah, you sacrifice long-range for the cuteness. if you just want to talk from like upstairs to the sidewalk though, this could be a good option? also COLORS

ArcShell AR-5
…
Buyers report solid performance under a mile, and ArcShell says in unobstructed conditions, the AR-5’s range maxes out at around five miles or so.

Ah. This ArcShell is 5 for $70, which is kinda cool, but mostly under a mile?

BaoFeng BF-F8HP
…
The new BF-F8HP boasts of a whopping 8 watts of power as compared to the 2W or less of most FRS radios. … If you want to use the full power and features of the F8HP, then you need to obtain a ham radio license or a GMRS license, or both.

also to remember if you get your ham license.

Midland LXT630VP3
…
and a range of up to 30 miles according to the manufacturer.
…
Buyers laud these radios for its impressive audio quality and range (although like with any of these radios, under 10 miles seems to work the best).

i mean, this one looks the most to me like a walkie talkie. it’s yellow. lol.

Baofeng UV-5R
…
With this particular radio, with no channels like most of the rest of our recommendations, you will need to ensure you have the proper licensing (if necessary) to transmit.

And then I looked at all of them in the order you linked, Judy, and I got to the end…

BaoFeng BF-F8HP
…
The new BF-F8HP boasts of a whopping 8 watts of power as compared to the 2W or less of most FRS radios. … If you want to use the full power and features of the F8HP, then you need to obtain a ham radio license or a GMRS license, or both. 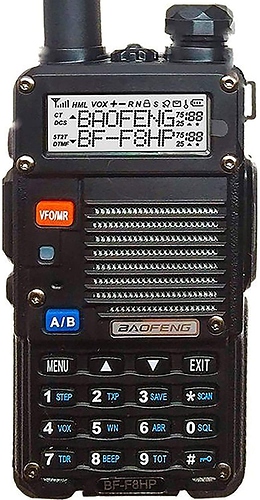 OMFG, this is so the hobby I’ve been waiting for! Why didn’t I listen to Season 1 of Stranger Things!

Of course I have to get a starter set for immediate use.

Okay, that leaves two categories, with two each.

I’m passing on the Arcshell.

So, we have two regular contenders in the Midland models, which we will call GXT and LXT for short:

GXT seems ever so nicer in ways that don’t seem to matter. 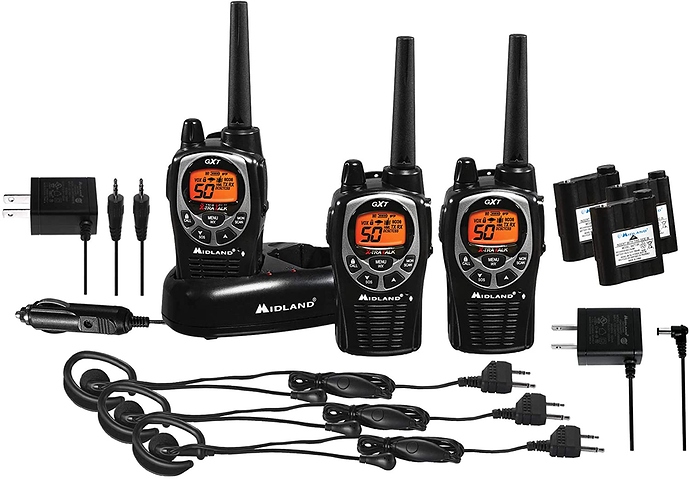 The LXT is yellow, kinda cuter, and slightly less powerful (and $25 less for the 3-pack). 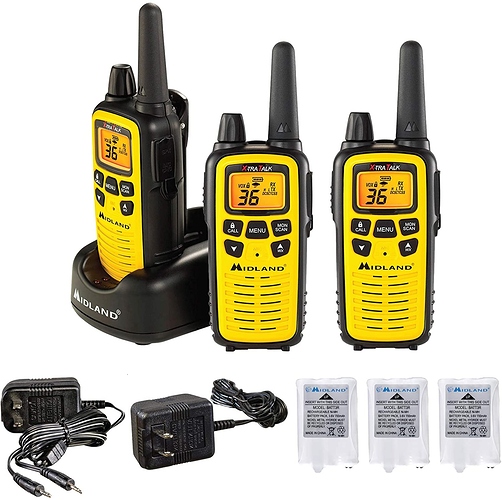 Then we have two “toy” sets. I’m all for these, just putting them together so we know what we’re dealing with. We have a friend with a schoolmate of Clover’s, they are maybe a quarter mile away, but also 3 hills (it really sucks to walk over there…), with lots of apartments. If these work in that scenario it would be great!

We’ll call the Midlands model X-Talker (full name X-Talker T20X4), because apparently the robot that normally names their products had the day off, and Adam X was interning… 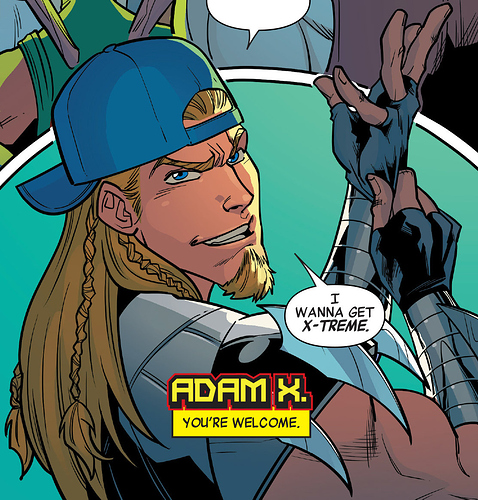 They come in a multicolored 4-pack, and look pretty sweet: 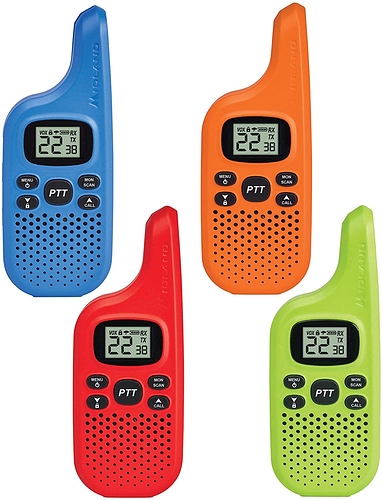 Compared to the Motorola T100TP (the most fearsome time-traveling mobile phone murderbot), with similar stats and disclaimers: 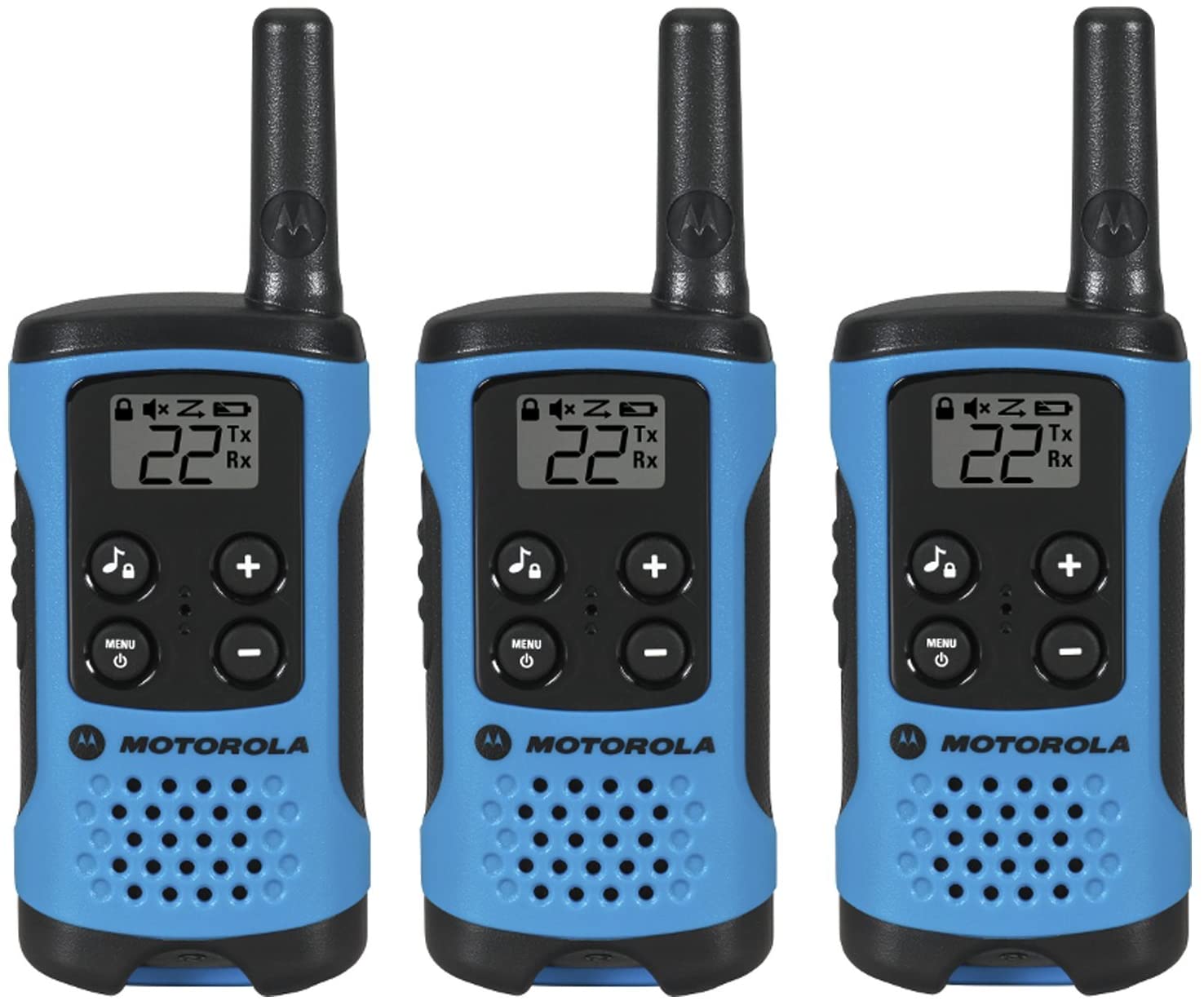 Both $40, so to experiment with those we really just decide which.

@susan, how ought we approach this? We could get the 4-pack of X-Talkers and see how fucking X-Treme they are if they work well on our hill.

Both lower end models use alkaline batteries, but Judy’s got us covered.

Or, we can go for what likely work well around the lake, and we’re looking at $75 - $100. I’m also good with those models, and they come with rechargeable batteries and charging stations.

And as soon as we get a sense we enjoy radio I will license us up for 10 years and get X fucking X-Treme X look at those fancy handsets.

i mean, i got a yaesu vx-6 because it is compact and submersible and i want to ham it up with the mermaids. 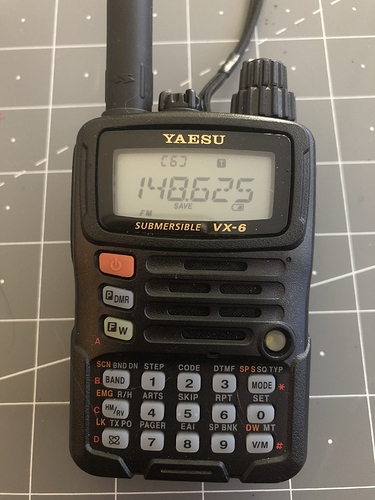 i will be honest: it’s a little overwhelming. but i now know how to save a frequency (and its attendant settings, like the inbound frequency offset) to memory, and recall it. i think. i need to refer to the manual.

back to your question! how wide is the lake? is it under a mile? it is flat so it should work, ya? are you imagining staying in touch while you’re walking together and sometimes apart on the lakeside?

i am imagining having a communication line to my friend that’s separate from grownup control (like a phone line), and it would be great and empowering!!??!!