Behold The 'Potato Head' Of Palencia, Another Botched Art Restoration In Spain 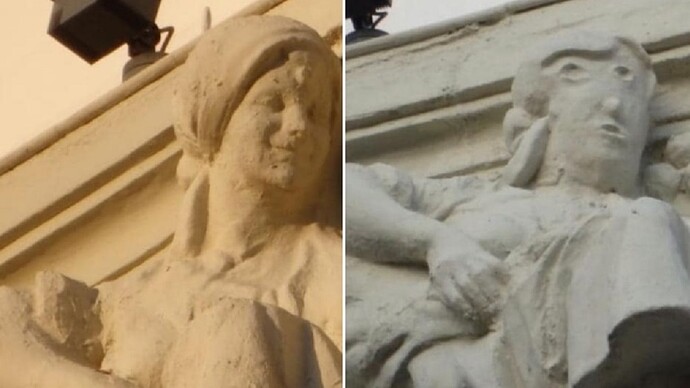 Behold The 'Potato Head' Of Palencia, Another Botched Art Restoration In Spain

The statue was once of a smiling woman in a pastoral scene. Now, it looks more like a melted candle with some gouged holes. Professional art restorers in Spain are calling for stricter oversight. 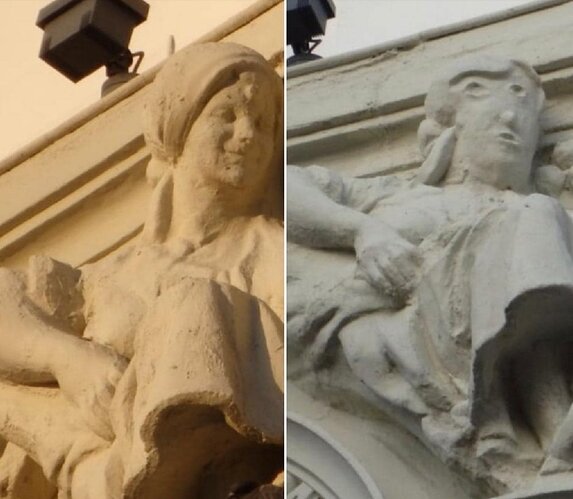 Before and after the recent “restoration” of a statue in the northern Spanish city of Palencia.

A melted face with two round cavities standing in for eyes, a misshapen lump approximating a nose, and an agape maw of a mouth: Behold the latest art “restoration” gone completely wrong in Spain.

The botched work, which is being likened to a “potato head,” came to widespread public attention via Facebook posts and photos from a Palencia-based artist, Antonio Guzmán Capel.

The Palencia “restoration” is the latest in an infamous line of nonprofessional art rehabs in Spain, including a 2012 repainting of a 19th-century fresco of Jesus, done by an 81-year-old church member, that gained the unfortunate international nickname of “Monkey Christ.”

More recent incidents in Spain include a day-glo repainting of a 15th century wooden sculpture of the Virgin Mary, St. Anne and the infant Jesus; the redoing of a 500-year-old St. George figure that turned him into a toy soldier; and multiple failed attempts to give the Virgin Mary a makeover in a copy of a painting by the Baroque artist Bartolomé Esteban Murillo.

The Palencia statue, which formerly was of a smiling lady placed within a country scene, adorns part of the facade of a bank in this city of some 78,000 in the country’s north. The Art Newspaper reports that the statue was originally unveiled in 1923.

It’s so funny, I just always wonder, what does it look like to the folks doing the restoration?! Like, at any point, were they embarrassed, or was it like, they woke up in a bizarro world, where no one appreciates their amazing restoration? Do they see what I see?

Also, it’s funny imagining these two statues talking to each other. So much personality in the eyes…

While the loss of historical art is always sad, the “restoration experts who are actually not-at-all qualified” is some of my favorite internet juice. 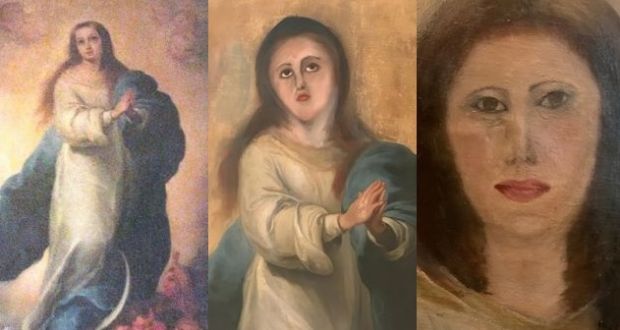 see, after a bad restoration, they paid to get it fixed!