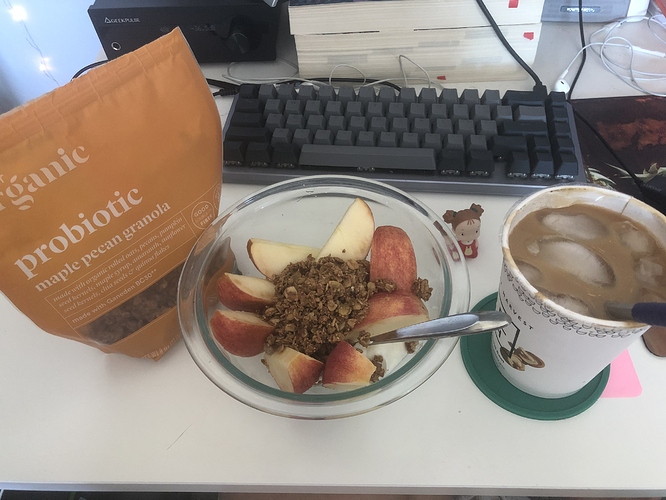 i have only one(?!) more song to go for a complete music collection in animal crossing: new horizons, thanks to several networks of real-life friends sharing freely

i have four-ish fossils to go

i took a shower haha. did not wash my hair 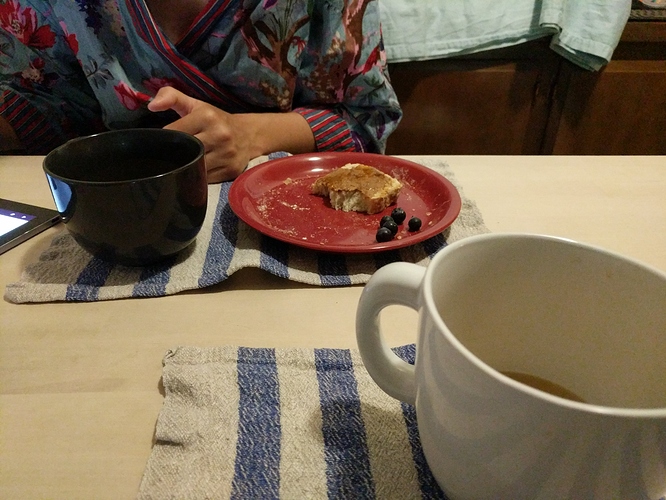 Clover had yogurt with stuff.

Hey, my “Essential Electronics Toolkit” from IFIXIT arrived, as well. Still waiting on the batter to Replace XPS13 battery, but it’s in transit.

That is, quite literally, all that you need.

Also, yesterday our showerhead fell off, the ring holding it on broke. Replaced with a “Waterpik EcoFlow”, and it is an upgrade from the last one. And claims to save water, something I support. Ace Hardware is not designed for social distancing in mind!

i am so glad you asked! when i took the picture i actually moved Mei down from the monitor so she could peek at you. when one of our a cappella mates F visited japan, he brought back a dozen tiny figures from the ghibli … amusement park, or something? something official. they are technically finger puppets! each member of spot the octopus got one. although Mei in the movie never wears a dress with a Totoro on it, i think my plastic figure has one to differentiate her from the girl in Ponyo. i have kept her on my work monitor all these years. Mei means a lot to me.

it’s funny, when we were distributing the finger puppets, my friend handed me Mei and said something like “and Mei obviously goes to you. this feels right.” and I actually thought she was the girl in Ponyo at first… but she’s definitely Mei lol. at that moment, i had only seen Totoro once, at like a family friends potluck or something, and didn’t really remember it. i saw it again much later, after reading a … well… a devastating article about how My Neighbor Totoro and Grave of the Fireflies were developed concurrently and released as a double feature. that article is amazing for a lot of reasons, but one of the details that really grabbed me was how the writer of that article spent a few paragraphs talking about the moment in My Neighbor Totoro where Mei runs back to her father and sister to tell her about finding the totoro in the forest, and at first they laugh, and she gets SUPER FUCKING PISSED and feels totally betrayed and devastated because they’re gaslighting her and it’s really frustrating to be 4 years old and have something truly incredible and magical happen and then have the people you trust and love the most tell you it didn’t happen. so when years later i finally saw totoro again, in a sold-out showing at the Roxie, several boyfriends later, i started crying when Mei started crying, but like not like cute crying, like embarrassing sobbing crying that i wanted to stop but i couldn’t stop, and then i basically didn’t stop sobbing throughout the entire movie, and then i sobbed the entire break (i don’t even remember now what the other ghibli movie they showed after… spirited away maybe?) and i didn’t talk to any of our friends during the intermission because i couldn’t stop crying. so yeah. that is how i feel about how Mei moves through the world. i guess it’s how i move through the world. i am still idealistic and still trusting and still betrayed when the people who love me refuse to listen to me and i still want to believe corn can heal my sick family and i can fix things by marching off somewhere all by myself even though i am so small and actually cannot fix things but that doesn’t mean i should give up on being alive or growing new vegetables or something.

when i took the picture i wondered if you’d ask me that too. in fact, i halfheartedly tried to move the camera so that it would be out of the frame because i feel shame when i look at it and then i gave up. we don’t miss a thing do we?

weeks after i started my new job at indiegogo, in november of 2016, my friend J (also from the collegiate a cappella group that my current a cappella group stems from) sent me a message encouraging me to buy a geekpulse DAC (digital audio converter). i looked at the link and it was from indiegogo. he didn’t even know i had just started working there. it was a coincidence that he was encouraging me to pledge for an item that was being listed for crowdfunding on the new company i was really really really really excited to be working as a “real” software engineer at. i’m not an audiophile but he and i had discussed audiophile things at length in the years we’d known each other before, so i think he correctly identified me as audiophile-curious, and extolled the geek pulse dac’s virtues as an amazingly good deal (because crowdfunding… $300 for something that’s usually well over $1000!) and a great first item so that i could begin building out a real audiophile setup. as a result, it was my first indiegogo pledge. i was excited to be suddenly making a moneys in my new job. i was so excited. i used my first “we will reimburse you $25 of any indiegogo pledge once a month” perk from working there. he was also trying to get stuff through the “refer a friend” program that only sometimes works (and you have to have had the right url params and probably not have clicked around for indiegogo to report “this pledge came from X other pledger” to the campaigners). so he never even got credit for my purchase. it, like many many many crowdfunding campaigns, got delayed. a lot. he told me through the years that he was extremely sorry for convincing me to buy one. during this time i dated someone who spent easily over $10,000 on a new audiophile setup for his new 3 story loft apartment with tube amps that glowed warm gold and also a mid-century modern credenza (also i learned what “mid-century modern” and “credenza” meant lol) to put it all on. oh AND a pair of fucking devialet phantoms for downstairs. fucking ridiculous. so i was entirely uninterested, then, in my own setup. except i sort of wanted to set it up in my own apartment out of like “fuck you i can be my own less rich audiophile too” which didn’t go anywhere because i didn’t put in the work to research speakers that would be within my reach.

the geek pulse dac arrived years later. i kept it in its original two boxes for like three years after that. every time i moved apartments, i would look at it in deep shame and then put it in a closet.

finally in the latter half of last year, J saw me posting on facebook for the like third time in a few years “hey does anybody want a $300 dac, i’m never ever ever ever going to buy speakers also i have no money now lol but not really lol, this is actually really bad” and again nobody wanted it and he expressed how sorry he was again and said the least he could do was gift me a set of old studio monitors that he doesn’t use anymore so that SOMEONE is actually using this kind of nifty device that has caused us so much anguish over the years. i accepted this gift lol. since i suck at actually meeting up with people, he passed it to a mutual friend when he drove up to visit friends from socal. it sat in her house for a few weeks before i actually made it to a cappella rehearsal, but i did get the speakers. i actually set them up right away in the last house, and again in the new house. they work well. J had explained to me that the “volume down” button on the remote doesn’t work, and sometimes the remote doesn’t work at all, but i don’t have to adjust the speaker volume ever; i just use the volume knob on the dac. so now i listen to world of warcraft classic music and sounds (which came out 15 years ago) through the fanciest sound system i’ve ever owned. lol.

i am sorry because stream of consciousness is not a good way to get information to you.

I think the opposite is true. I personally understand more when wandering through one’s hidden world.

I’m an appropriate-audiophile: I use my best equipment. I don’t have so much I don’t use any, and it isn’t so specialized it needs a time/place/genre to enjoy. And after I get my laptop battery and desktop harddrive replaced, I’m gonna replace the cable and pads on my old MDR7506s… and if that works I’m gonna do it again on my “new” MDR7506s.

I’ve never lived in a place where a good speaker system makes sense; we’d never listen to it loud enough to tell. That’s why I go for headphones. There are open back headphones that I could kinda leap-frog sound experience without investing a whole bunch, but again: when am I gonna be somewhere I can listen to headphones without backs on them? Not at home, not on the sidewalk, not on a bus…

When I got my Cowon Plenue D, I considered getting bluetooth devices, so whichever player I got would act as these new advanced Bluetooth DACs. But it’s so much energy usage for such an easy task, just to not have a cord… I landed on the Plenue D because it was tiny, had more than enough output to meet my MDR7506s drivers, and expandable storage.

Glad you have a setup for it! We’ve gotten some amazing soundtracks from video game composers, most would be great ambient music.